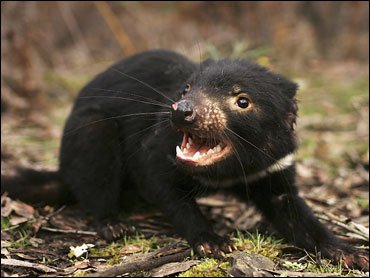 Tasmanian devils - the marsupial made famous as a snarling cartoon character named Taz - are being relocated to an island off Australia to avert their extinction by a contagious cancer.

Some scientists fear the move could endanger rare birds and other animals on the island, but other experts say it is a last resort and should pose no problem since the devils are scavengers, not predators.

"The path to extinction is looking pretty certain on Tasmania," said William Karesh of the New York-based Wildlife Conservation Society, who organized a workshop in Australia to help the government and biologists develop a plan to save the devils.

The fox-like animals with powerful jaws and a bloodcurdling growl - made famous by their Looney Toons namesake - are being wiped out on the island state of Tasmania by a contagious cancer that creates grotesque facial tumors.

The disease was first noticed in the mid-1990s in the state's northeast, where 90 percent of the devils have since perished. It is spreading south and west, and scientists estimate that within five years, there will be no disease-free population in Tasmania - the only place in the world where the devils exist outside zoos.

"I think there's a real risk of extinction within 20 years across the whole of Tasmania," said Hamish McCallum, a professor of wildlife research at the University of Tasmania.

McCallum is among a group of experts who plan to transfer 30 devils off Tasmania's east coast to Maria Island - a former 19th-century prison that is now home to several endangered species of birds.

The move, which state and federal governments are expected to approve within weeks, is controversial because scientists can only guess at the impact the introduced carnivores will have on the uninhabited island's ecology.

"I don't want to get into an argument about whether a devil is worth more than a forty-spotted pardalote," he said, referring to an endangered bird species that has made Maria Island its home. "But in my opinion, the risk posed to endangered species by devils would be minimal."

David Obendorf, a veterinary pathologist who in 2000 sounded one of the first warnings of the threat to the devils, said several experts shared his concerns about the plan.

"It's clearly an experiment and I think they are considering the need to act decisively and quickly because this disease is more important than the consequences," Obendorf said.

Karesh, director of the Wildlife Conservation Society's field veterinary program, said that when introducing a species to a new habitat, it's "always a possibility" the animals will conflict with their new environment, though he said the science behind such moves is now very sophisticated.

One of the greatest risks is that the relocated species may fall victim to a disease they have no resistance to in their new home, he said.

Luke Hunter, director of the Wildlife Conservation Society's great cats program, said the plan did not strike him as overly risky since Maria Island is similar to the devils' natural habitat.

"Devils maybe never got (to Maria Island), but it's not a stretch of the imagination that they can survive there," said Hunt, who is an expert on animal translocation programs. Since devils are primarily scavengers, they were unlikely to threaten other animals on the island, he said.

"What it's always about is humans making some kind of choice," Karesh said, since saving one animal might endanger another, regardless of the precautions taken. "Those are value judgments."

Maria would be the first of about a half-dozen islands to become quarantined colonies of wild devils, which are currently not found on any of the thousands of Tasmanian islands.

Advocates hope that if devils are wiped out on the Tasmanian mainland the disease will die along with them, and the animals placed in havens can then be safely reintroduced.

Karesh said biologists have already begun to quarantine healthy devils to ensure the disease does not travel with them to Maria. The cancer tends to show up a year or two after infection, so a long quarantine can root out sick animals.

Maria Island has been identified previously as a potential species-saving haven.

In the 1970s, authorities said it would be an ideal sanctuary for the devils' cousin, the Tasmanian tiger - a striped, Labrador-like carnivore that like the devil carried its young in a pouch - and stocked it with kangaroos and wallabies that could be prey for the animals.

But the last known tiger died in a zoo in 1933, and long-held hopes of finding some in the wild never materialized.

Kangaroo numbers on Maria have since exploded, and hundreds have to be shot at regular intervals to prevent them starving through overgrazing.

Supporters of the devil colony note that Maria is far from a pristine ecosystem and that the kangaroos and wallabies present potential food sources that have no rightful place in the island environment.

Critics argue the devils might threaten the endangered stag beetle or bird nesting areas on the island.
By Rod McGuirk and Sarah DiLorenzo 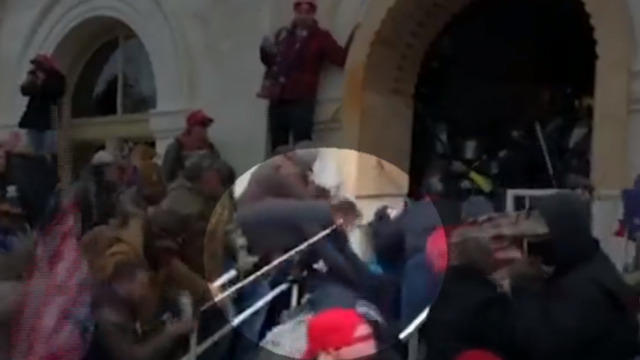 Architect of the Capitol Brett Blanton, who could have approved a request for the National Guard during the January 6 riot, said he was never consulted before or during the attack. Kris Van Cleave reports.