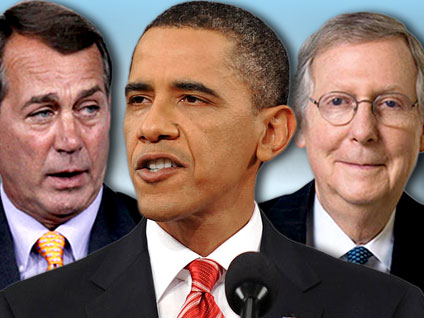 The debate over extending the Bush tax cuts has entered a new phase, at least metaphorically: It used to be a hostage crisis. Now it's a game of chicken. Before the election, President Obama said Republicans were holding middle-class tax cuts hostage: Everyone gets a tax cut or no one does. It was a dramatic analogy, but it had a political flaw: Democrats were watching the windows and blocking the doors. There was enough Democratic support for the GOP position that congressional leaders didn't dare risk a vote.

Now the election is over, and the expiration date for the tax cuts is weeks away. If nothing is done by the end of the year, the Bush cuts self-destruct, as they were designed to, and everyone's taxes go up. The parties are at odds on how to solve this problem. But as the cars head toward each other, at the moment only the White House looks as if it's going to swerve.

It looks that way because the president has not been as definitive as the Republicans have been. Obama would like a permanent extension of the tax cuts for the middle class (defined as families making $250,000 or less per year) and would accept a temporary one for those making more than $250,000. The Republican position is that the tax cuts should be extended for everyone for the same period of time. If not, they won't vote for anything.

And the Republicans have said they're willing to crash their car if they don't get what they want. Taxes would increase for everyone. Those who get a paycheck would see the first one of 2011 shrink. Why hasn't the president said the same thing? Because for months he has not been able to make Republicans pay for obstruction. No matter whose fault it is, he'll get the blame if there's an accident.

The main dispute surrounds the issue of splitting the tax cuts. The White House hopes to separate the popular middle-class tax cuts, which they would like to be permanent, from the less popular ones for the wealthy, which they would like to be temporary. In the future debate over shrinking the deficit, when the hunt for budget savings is even more acute than today, it will be easier for a politician to let the temporary rate for the wealthy expire to bring in more revenue than to do so by casting a vote to increase that tax rate.

Republicans, for their part, once pushed for a permanent extension of all cuts but have since come around to the idea of a temporary extension of all tax cuts. Sen. Jim DeMint has said he'd go for that if it's all he can get. This is an echo of what incoming House Speaker John Boehner said in September. What they haven't come around on, however, is the issue of separating the tax cuts into middle-class and for-the-rich versions. "We would be foolish to fall for it," said the incoming chairman of the House Ways and Means Committee, Dave Camp. Senate Minority Leader Mitch McConnell and Boehner feel the same way.

That the White House is even contemplating a temporary extension of the tax breaks for those families that make more than $250,000 is something new, though you'd be forgiven if you were confused about what exactly the president believed. Last week, White House adviser David Axelrod told the Huffington Post that the president was prepared to negotiate with Republicans on tax cuts for the wealthy that he once opposed. This seemed pretty obvious from the president's news conference after the election, but saying it out loud caused an uproar. Democrats were angry at Axelrod on tactical and political grounds. Progressives wanted a fight that framed the GOP as the party that only cares about millionaires and billionaires. Tacticians wanted the president's team to take a harder line. By threatening to refuse to accept even a temporary extension of tax cuts for those making more than $250,000, Obama would be in a position to win concessions from Republicans.

On Fox News Sunday this week, Axelrod sounded as if he had backed off his comments, saying the president had not changed his position. "We cannot afford to go the additional step and permanently cut taxes primarily for millionaires and billionaires at a cost of $700 billion for the next 10 years alone," he said. Sounds definitive--but the word "permanently" gives him away.

Not so long ago, the idea of extending the tax cuts to the wealthy, even temporarily, was out of bounds in the White House. In early September, former Obama budget director Peter Orszag wrote a column in the New York Times suggesting that the president should embrace a short-term extension of the Bush tax cuts for the wealthy. This drew a rebuke from the podium by Press Secretary Robert Gibbs. Treasury Secretary Geithner also spoke against it, arguing that a temporary extension was just a ploy in advance of making the cuts permanent. A couple of months ago, when John Boehner said he would accept a two-year extension, the president accused him of trying to hold the middle class hostage.

Now that Obama has bent a little, must he buckle all the way and accept the GOP position? Not necessarily. By looking open to GOP ideas, moderating his stance on tax breaks for the wealthy, and hosting GOP leaders at the White House, the president appears chastened and accommodating. If a bill comes to the floor of the House and Senate extending the tax cuts for everyone, can Republicans really vote against that simply because they don't like the fact that the tax cuts for the rich will expire? The country is not in love with the GOP. Not taking yes for an answer would be risky.

The problem for the president is the one he had before the election: He might lose Democratic senators like Evan Bayh of Indiana, Ben Nelson of Nebraska, Kent Conrad of North Dakota, or Independent Joe Lieberman of Connecticut, who will vote with Republicans.

Progressive Democrats, meanwhile, are working at cross purposes with the president. They would like a fight. They already think Obama has compromised too much by even entertaining the idea of a limited extension of the tax cut for upper-income families. They've called on House Speaker Nancy Pelosi to block any proposal to do so. Labor leaders are calling for a similar strategy.

Senate Democratic aides say a bill that extended current rates only for the lower brackets would not pass in the Senate. Given that reality, the White House shows no appetite for this kind of symbolic fight, at least right now. The general view is that the president and Republicans will ultimately agree to extend all cuts for a few years. One administration official argues that there will be plenty of time to brawl with Republicans next year. In the meantime, the president wants to remind independent voters that he is closer to the man they voted for in 2008 and that he is at least trying to work with the other side, as they say they want him to.

Two Democratic senators have tried to change the dynamic by offering a compromise approach. Chuck Schumer of New York has suggested increasing the income level for extending the tax cuts from $250,000 to $1 million. The White House and a number of Democratic Senators don't like that idea, because at that income level, they can no longer claim that the cuts are for the middle class, a term that has some power in political fights. Mark Warner of Virginia has offered a plan that would not extend the rates for the wealthy in exchange for targeted tax cuts for business. The plan has no GOP support yet, and while some Democratic officials like it, the details are too complicated to work out in the brief lame-duck session. (Congress leaves town for the week of Thanksgiving and then comes back for only a few weeks in December before heading home for good.)

The president had planned to discuss extending the Bush tax cuts when he met with Democratic and Republican Congressional leaders Thursday, but Republican leaders had scheduling conflicts. The meeting is now scheduled for Nov. 30. That would leave just a couple of weeks for the president and the GOP to make a deal before Congress is scheduled to go home. What's a game of chicken without a little time pressure?