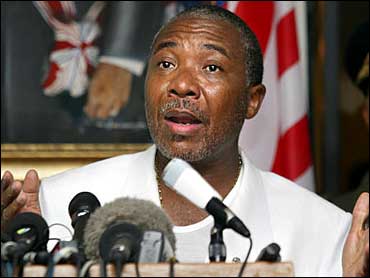 Embattled President Charles Taylor accepted an offer of asylum in Nigeria on Sunday, but gave no timeframe for quitting power and insisted the transition must be orderly, urging the United States to send peacekeepers.

The calls by Taylor and Nigeria's leader for a peaceful transition increase pressure on U.S. President George W. Bush to send U.S. troops to Liberia to enforce a cease-fire in the war-torn nation. Bush heads to Africa on Monday for visits to five nations — including Nigeria, the top powerbroker in West Africa.

A team of about a dozen U.S. military experts were to head to Liberia late Sunday to begin assessing whether to deploy troops as part of a regional force, as the United Nations, European powers and the Liberians have sought.

Taylor is under intense international pressure to step down — President Bush said Saturday he would "not take 'no' for an answer" — and is holed up in a capital surrounded by rebels. But he has insisted peacekeepers deploy before he will go to ensure fighting does not erupt again.

Another complication is the threat of trial on war crimes charges that hangs over Taylor's head after his indictment by a U.N.-backed court in Sierra Leone.

Taylor made his announcement after Nigerian President Olusegun Obasanjo met him at Monrovia's airport to personally offer asylum in his country.

But, Taylor said, "it is not unreasonable to request that there be an orderly exit from power." He said U.S. participation in an international peacekeeping force planned for Liberia was "crucial in every way."

"We embrace it. We accept it," he said of the possibility of U.S. involvement in a peacekeeping mission.

Taylor and Obasanjo would not say when the Liberian president would step down, but Obasanjo said "we believe that it will not take place in the near future." Both warned that too hasty a departure could spark new fighting in the West African nation, where hundreds were killed in a failed rebel push into the capital last month.

"We believe the exit should not take place in confusion ... in a way that will lead to more bloodshed," Obasanjo said. "We believe the transition should be orderly and peaceful." He said the peacekeepers' deployment should take place "in a very, very short time."

Though Taylor insisted Sunday that deployment of a peacekeeping force was not a condition for his departure, he said it was "necessary ... to prevent disruption."

The United Nations, several European powers and most Liberians want the Americans to lead the peacekeeping mission. West African leaders have put up 3,000 troops for a force.

In the United States, Sen. John Warner, the Armed Services Committee chairman, said that Congress should hold a vote on any U.S. troop deployment to Liberia.

Because of the deadly chaos in Liberia, "we've got to think through very, very carefully the insertion of U.S. forces in there," Warner said on a television newsmagazine program.

White House spokesman Jimmy Orr said: "What the president has said is Mr. Taylor needs to leave and leave soon. He needs to leave so peace can be restored."

Rebel officials welcomed the news, but said they had no confidence Taylor would follow through and leave Liberia.

"I hope this time around Mr. Taylor will act on his words," said a rebel leader, Kabineh Ja'neh in Accra, Ghana. "Far too often he has failed to honor what he says. We don't trust him. Not at all."

The visit by Obasanjo to bring the asylum offer in person underlined the urgency of international appeals for the Liberian leader to leave.

Obasanjo arrived by jet in Monrovia airport, stepping into an embrace and kisses by both cheeks by Taylor. Taylor's retinue handed Obasanjo, dressed in flowing traditional robes, a live white chicken and some cola nuts — a customary Liberian gift symbolizing purity of heart and peace.

Among the hundreds of Taylor supporters on the airport tarmac, many carried banners, one reading, "U.N please drop the charges against President Taylor, for peace sake."

The war crimes indictment — issued June 4 by the Sierra Leone court — likely weighs heavily in Taylor's decision-making on leaving power. He has said Liberia will not know peace until the charges against him are lifted.

Nigeria, like many countries, has no law allowing Taylor to be extradited to the Sierra Leone court for war crimes trial, U.N. officials say.

In an apparent warning that Nigeria should not be pressed to hand over Taylor, Obasanjo said his sole condition for the asylum offer is that his country "not be harassed by anyone for inviting Taylor ... not by any organization or country for showing this humanitarian gesture."

The war crimes court indicted Taylor for his role in Sierra Leone's recently ended decade of terror. Taylor has been accused of supporting the brutal Revolutionary United Front rebels, whose trademark atrocity was amputating the arms and facial features of their civilian victims with machetes.

President Bush is scheduled to land Tuesday in Senegal, one largely peaceful West African nation that hasn't seen the ill effects of years of warmaking by Taylor - a former warlord long accused of sowing strife in the region by aiding rebel groups.

Taylor sparked Liberia's strife when he launched his 1989-1996 insurrection. He was elected president in 1997 by a war-weary populace. Nearly one third of Liberia's 3 million people have been forced from their homes by fighting since rebels took up arms against Taylor in 1999.