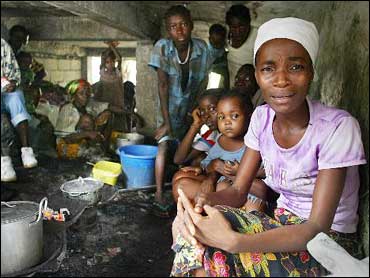 President Charles Taylor on Saturday urged international peacekeepers to hurry to Liberia and renewed pledges to step down when they arrive, as shelling brought new carnage to the capital's trapped people.

President Bush, who has ordered U.S. troops to Liberia's coast to support a promised West African peace force, repeatedly has demanded that former-warlord Taylor cede power as part of any peace deal.

"Let nobody have any concern about, 'Will President Taylor step down?"' Taylor, who has repeatedly reneged on just that pledge, told a prayer rally in Monrovia's leading sports stadium. "I will step down."

His pledge came hours after a mortar round slammed into a church harboring thousands of refugees, killing at least three and wounding 55 others. The slaughter at Monrovia's Great Refuge Temple marked the second deadly shelling in two days of public buildings crowded with refugees.

Hundreds of civilians have died in a week-old rebel assault on Monrovia, the latest round in insurgents' two-month battle to take the city and topple Taylor.

The church, on a hill overlooking Monrovia's rebel-held port and the heavily contested bridges leading from it, has taken in 5,000-6,000 people since rebels opened their attacks on the capital in June, the Rev. Michael Chea said.

Spiritual and government leaders in Liberia's war-gripped capital declared the day one of prayerful fasting — a move bitterly resented by many ordinary people in a besieged, disease-ridden and hungry city of more than 1 million.

Fighting raged at the port. Witnesses said five shells fired from rebel-held turf crashed into the ground around the church about 4 a.m. A sixth hit the church directly, exploding among the refugees bedded down for the night.

Fragments hit one young woman lying alongside her baby, killing the woman but sparing the 1-month-old infant.

"Terrible, terrible, this war," said Konah Macgee, whose uncle was killed in the barrage. "Our people are just dying day and night. Rockets are falling. Innocent people are dying."

Neighbors, contacted by telephone, earlier had said they counted 15 dead at the church. Chea, the pastor, said three died — two people whose bodies were still lying before the church, and a third who died later at a hospital.

About 55 people were wounded, 14 of them seriously, Chea said.

Elsewhere, in soil next to Monrovia's rocky Atlantic beaches, aid workers buried some of the dead from the previous day's assault, in which shells pounded a neighborhood around the U.S. Embassy in Monrovia, hitting homes and a school filled with refugees. That attack killed at least 26, and wounded at least 200.

The repeated civilian carnage has played out as international figures debated for weeks over a multinational peace force for Liberia.

After weeks of hoping for rescue from outside, Monrovia's people reacted with disbelief, even bitterness, at news that Mr. Bush had ordered deployment of U.S. troops to Liberia's coast.

He said Americans would have only a limited role in what is to be a West African-led peace force. The force's planners have yet to announce a firm deployment date.

"We gave our lives for Americans before. We expected Americans to do the same for us," Wright said, referring to the freed American slaves who founded Liberia in 1847.

"But it took a long time for America to come to our aid. It shouldn't be that way," Wright said.

"You see, everybody looking to George W. Bush," said Bill Jacobs, speaking in the war-ruined, congested streets of Monrovia. "But I think it's only God can solve our problem right now, because we have to depend on Bush for a long time, man," Jacobs said.

Pentagon officials said Friday that the only major troop movement in the works was the dispatching of three Navy ships carrying hundreds of Marines to the waters off the Liberian coast.

The troops were sent to assist the arrival of the first West African troops of a 3,250-member international peacekeeping force. Nigeria plans to deploy two battalions within days.

Monrovia's residents had pleaded for U.S. deployment in their nation. A few weeks ago, even false rumors of U.S. Marines landing were enough to set off dancing and singing in the streets.

But many have grown angry after weeks of waiting amid increasing violence. Some wondered why Mr. Bush was bothering at all now.

Mr. Bush has demanded that Taylor cede power as part of any peace deal for Liberia. Taylor, indicted by a U.N.-Sierra Leone war-crimes court for his support of rebels in neighboring Sierra Leone, has repeatedly promised to step aside, only to later hedge.

Meanwhile, spiritual and government leaders declared Saturday a day of prayerful fasting — a move bitterly resented by many ordinary people struggling to survive in the besieged, disease-ridden and hungry city.

"Everybody is already fasting, because there is no food," said Boaki Kiate, who has lived for two months in the squalid sports stadium, where refugees have been sleeping on the concrete floors of old locker rooms and corridors.

Ragged refugees largely ignored the finely dressed, 5,000-strong crowd gathered in the bleachers above to hear Taylor once again vow to resign. Dignitaries, clerics and security forces with AK-47s listened to a choir robed in red, white and blue.

"I'm a Christian. I can pray myself," said Paul Digen, a teacher whose sister died of cholera at the stadium last week. "I'm going to find food."