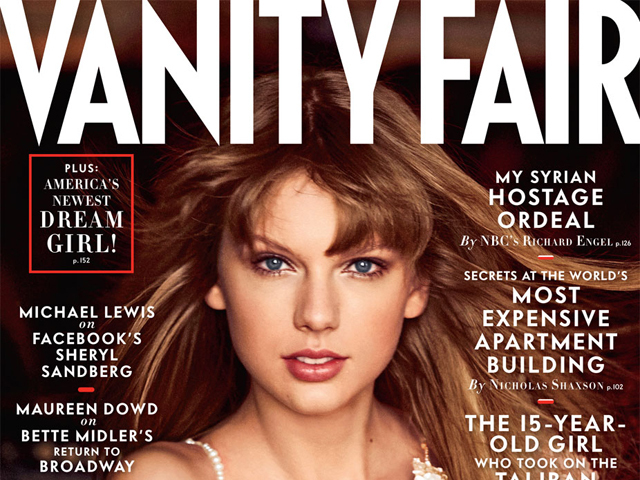 Taylor Swift is setting the record straight on her much-talked-about love life in a new interview with Vanity Fair.

The singer, 23, tells the magazine in its April issue: "You know, if you want some big revelation, since 2010 I have dated exactly two people," referring to Conor Kennedy and One Direction's Harry Styles.

Swift, who has also been linked to stars like Jake Gyllenhaal, John Mayer, Taylor Lautner and Joe Jonas, added, "The fact that there are slide shows of a dozen guys that I either hugged on a red carpet or met for lunch or wrote a song with... it's just kind of ridiculous."

She also tells Vanity Fair contributing editor Nancy Jo Sales that she "has to avoid the tabloid part of our culture, because they turn you into a fictional character."

When asked if she's boy crazy, Swift replied, "For a female to write about her feelings, and then be portrayed as some clingy, insane, desperate girlfriend in need of making you marry her and have kids with her, I think that's taking something that potentially should be celebrated--a woman writing about her feelings in a confessional way--that's taking it and turning it and twisting it into something that is frankly a little sexist."

The magazine says that while Swift doesn't go into specifics on her relationships, she authorized someone who knows her well to discuss them with Sales. The source said that Styles "wore her down" after allegedly chasing Swift for a year. "He was all, like, 'You're amazing -- I want to be with you. I want to do this.'"

The relationship broke down after he was photographed "making out" with another girl, the source continued, but he pursued her for the better part of a year until she took him back. "But the whole time she says she feels like he's looking at every girl," the source added. And when they were in London together, he "disappears one night and after that it was like he just didn't want to keep going." (Styles' rep told Vanity Fair that all of Swift's source's claims are "undeniably false.")

Swift also responded to rumors that she bought a home near the Kennedys in Hyannis Port, Mass., saying, "People say that about me, that I apparently buy houses near every boy I like -- that's a thing that I apparently do. If I like you I will apparently buy up the real-estate market just to freak you out so you leave me." Vanity Fair reports that Swift did actually purchase the home, but the singer's source said it was recently resold.

"It was like a house-flip," the source said. "A good short-term investment."

The singer's romance with Kennedy, then 17, was a "two-month thing," according to her source. Why did she go for a younger guy? The source told Vanity Fair: "She dated Jake [Gyllenhaal] and John [Mayer] when she was really young and they were in their 30s, and she got really hurt. So it was like 'That hurt -- this won't. But then it did.'"

The April issue of Vanity Fair will hit newsstands in New York and Los Angeles on March 7, and nationwide on March 12.