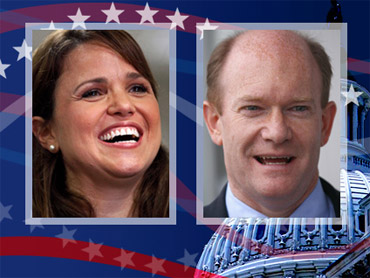 CBS projects that Republican Marco Rubio is the winner of the Florida Senate race. Rubio's victory, along with Rand Paul's victory in the Kentucky Senate race, give the Tea Party two resounding wins so far on Election Night.

Rubio managed to fend off his Democratic opponent Kendrick Meek, as well as a formidable challenge from independent candidate Charlie Crist, whom Rubio defeated in the Republican primary. By 8:30 p.m. ET, Rubio held a solid 50 percent of the vote, while Crist garnered 29 percent and Meek won 20 percent.

Republicans also won a meaningful victory on the House side, where Republican Robert Hurt is the projected winner in the race for Virginia's fifth district. At 8:30, Hurt led Democratic incumbent Tom Perriello 52 percent to 46 percent. Perriello ran unabashedly on his record of supporting President Obama's agenda, and his re-election bid was considered something of an indicator as to whether the Obama supporters who voted in 2008 would mobilize again this year.

Republicans also picked up a seat in North Dakota, where John Hoeven is easily the projected winner for the seat being vacated by retiring Democratic Sen. Byron Dorgan.

Democratic Sen. Patrick Leahy is the estimated winner in Vermont, and Republican Sen. Jim DeMint is the projected winner in South Carolina.

As polls continue to close across the country, Republicans are poised to win back dozens of congressional seats and possibly regain control of the House. The new balance of power will present a challenge for the president as he attempts to continue with his agenda through the second half of his term, and it will give voters renewed expectations for progress in Washington.

Republicans need to gain 39 seats in the House to win control and 10 in the Senate. Voters may be willing to put the GOP back in power after growing impatient with the poor economy and high unemployment rates that have lingered under Democratic control.

Indiana's independent vote was particularly important for Mr. Obama in 2008, when voters helped him become the first Democratic presidential candidate to win the state in 45 years. In 2008, 54 percent of independents voted for Mr. Obama, while 43 percent voted for McCain. This year, however, preliminary exit polling shows 60 percent of independents supporting Coats, the Republican, and just 32 percent voting for Ellsworth.