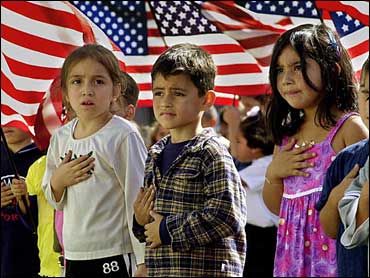 The Supreme Court at least temporarily preserved the phrase "one nation, under God," in the Pledge of Allegiance Monday, ruling that a California atheist could not challenge the patriotic oath.

The procedural ruling did not directly address whether the pledge recited by generations of American schoolchildren is an unconstitutional blending of church and state.

The court said the atheist could not sue to ban the pledge from his daughter's school and others because he did not have legal authority to speak for her.

The father, Michael Newdow, is in a protracted custody fight with the girl's mother. He does not have sufficient custody of the child to qualify as her legal representative, eight members of the court said. Justice Antonin Scalia did not participate in the case.

"When hard questions of domestic relations are sure to affect the outcome, the prudent course is for the federal court to stay its hand rather than reach out to resolve a weighty question of federal constitutional law," Justice John Paul Stevens wrote for the court.

"I may be the best father in the world," Newdow said shortly after the ruling was announced. "She spends 10 days a month with me. The suggestion that I don't have sufficient custody is just incredible. This is such a blow for parental rights."

The 10-year-old's mother, Sandra Banning, had told the court she has no objection to the pledge. The full extent of the problems with the case was not apparent until she filed papers at the high court, Stevens wrote Monday.

Chief Justice William H. Rehnquist agreed with the outcome of the case, but still wrote separately to say that the pledge as recited by schoolchildren does not violate the Constitution. Justices Sandra Day O'Connor and Clarence Thomas agreed with him.

"The court took the easy way out in this case," said CBSNews.com legal analyst Andrew Cohen. "The justices could have issued a decisive ruling one way or the other if for no other reason than to generate some clarity in this area."

"But the effect of this ruling is to permit the pledge to stand, with those words in it, pending some future challenge which may or may not come," Cohen said.

The high court's lengthy opinion overturns a ruling two years ago that the teacher-led pledge was unconstitutional in public schools.

A 9th U.S. Circuit Court of Appeals panel decided in June 2002 by a 2-1 margin that Newdow's daughter should not be subjected to the words "under God."

The court said the phrase was an endorsement of God, and the Constitution forbids public schools or other governmental entities from endorsing religion.

A national uproar followed the ruling. President Bush and Congress immediately condemned the decision. The full appeals court in February rejected the Bush administration's request to reconsider its decision. That set up the move to the Supreme Court.

The Supreme Court has already said that schoolchildren cannot be required to recite the oath that begins, "I pledge allegiance to the flag of the United States of America." The question put to the Supreme Court in this case was: Does the use of the pledge in public schools violate the Constitution's ban on government-established religion?

The First Amendment guarantees that government will not "establish" religion, wording that has come to mean a general ban on overt government sponsorship of religion in public schools and elsewhere.

The Bush administration has argued that the reference to God in the pledge is more about ceremony and history than about religion. But God was not part of the original pledge written in 1892. Congress inserted it in 1954, after lobbying by religious leaders during the Cold War.

Despite the technical nature of Monday's ruling, it is a victory for the Bush administration, says Cohen, and it ends the legal debate for the foreseeable future, since any future challenge to the Pledge will have to work its way up from lower courts.

Newdow said he would continue that fight.

The court on Monday also:

The high court is due to weigh in on several other controversial cases before heading off for their summer break in a few weeks, Cohen reports.

In the case of two so-called "enemy combatants", the court is being asked whether constitutional protections against U.S. citizens being locked up without trial apply in the war on terrorism.

Another case concerns the detainees at Guantanamo Bay. An attorney for detainees says that the United States has created a "lawless enclave" at the military base in Cuba. The Bush administration asserts that in war, the constitution gives the president broad powers.

The court is also to weigh in on a nearly three-year fight over access to records of Vice President Dick Cheney's work on a national energy strategy.