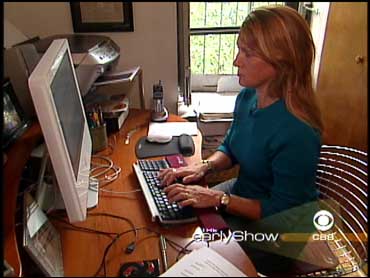 Earlier this year, Larry Smith realized his dream of founding his own online magazine, SmithMag.net. He works from home.

Working from home means logging on anywhere and at just about anytime of day — on the couch, and in the bedroom.

"Larry is on the computer all the time, 24/7," Smith's wife, Piper Kerman, said. "I think the magazine is wonderful, but it is something that is totally pervasive. I feel that the laptop in the bedroom is potentially the one place that should really be off limits."

Kerman doesn't bring technology into the bedroom, preferring instead to work in the couple's small office.

"She doesn't even talk on the cell phone in the bedroom, you know," Smith said. "She has got much better boundaries."

We're newlyweds and I do think that the bed is a place for, you know, restorative sleep and it's a place for romance and that, you know, the computer and work don't really have a place there," she said.

A study this past January said that just having a television in your bedroom can cut your sex life in half. Imagine what being wired 24/7 can do.

So how do you set limits when the very nature of your work keeps you tied to the computer around the clock?

"Late at night when we're sort of attempting to wind things down, it's not as OK," Smith said. "So I try to avoid that."

"We try to stay on the same page," Kerman said. "I mean, he's pretty respectful when I'm like, 'Get that laptop outta here!' "

Therapist Ian Kerner said BlackBerrys, cell phones and e-mail are invading the bedroom and hurting our ability to connect with out mates.

"It's part of a growing syndrome where we are tuning out of our relationships, and not tuning into each other," he said. "I think it's just a feeling of wanting to stay connected. … afraid of being alone. And sometimes you can be in the bedroom with somebody and still feel alone. Technology is a way of feeling immersed and connected and present."

Kerner offered some tips for people who want to stop technology from encroaching on their love-life.