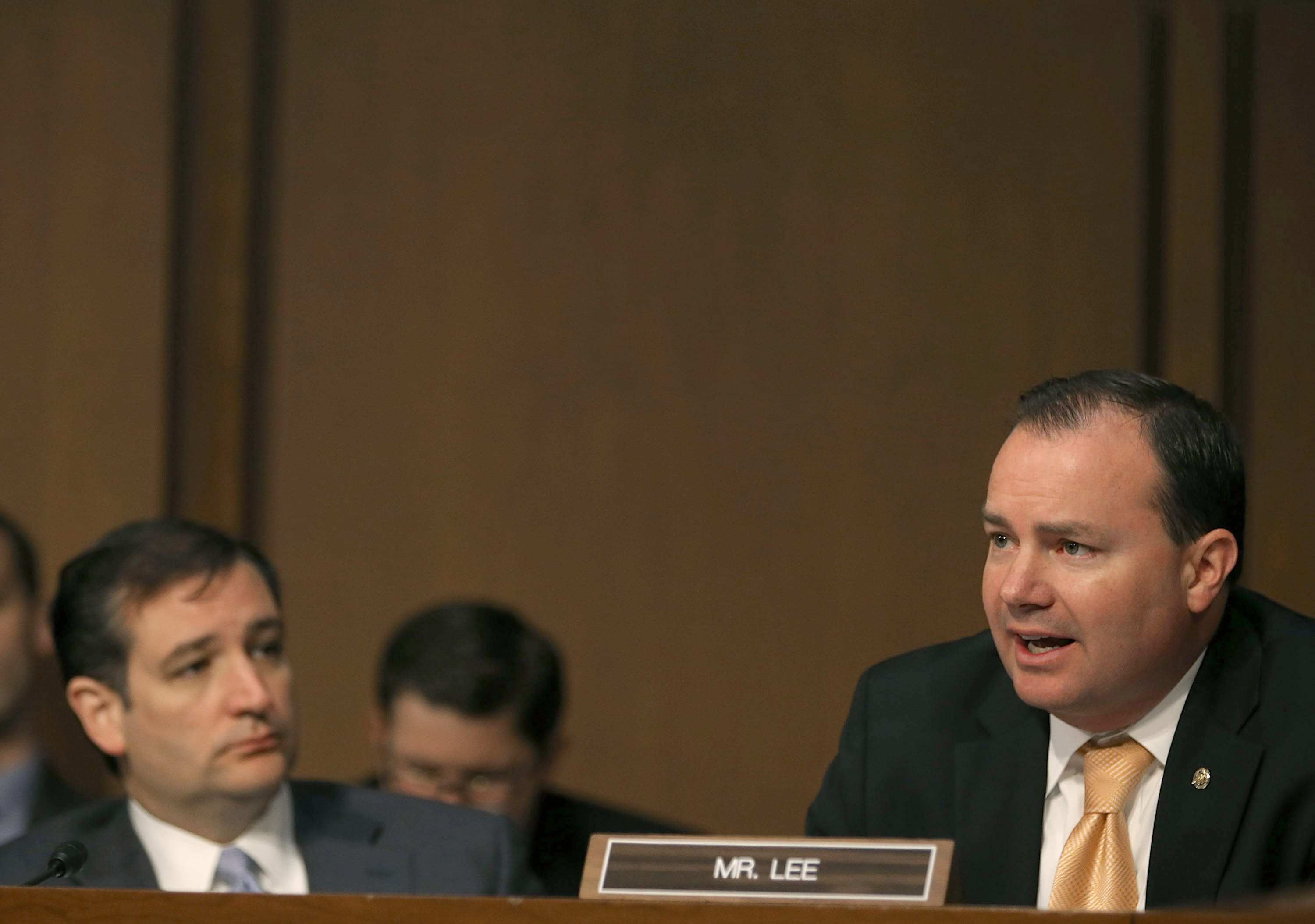 Utah's Mike Lee became the first senator to endorse Ted Cruz on Thursday, urging his party to "unite behind" the "unstoppable" Republican candidate.

The Utah Senator's endorsement of Cruz, which came just hours before a Republican debate, is a blow to the campaign of Florida Senator Marco Rubio, who had courted and co-sponsored legislation with Lee. The press conference's location in the debate spin room guaranteed the presence of over two dozen cameras with the major cable networks carrying Lee's remarks live. Earlier in February, Lee campaigned with both Rubio and Cruz in South Carolina.

Pressed on whether he thought Rubio should drop out, Lee said he would "encourage him to get behind Ted Cruz."

It was the second notable endorsement that the Cruz campaign unveiled on Rubio's home turf, with the first being former presidential candidate businesswoman Carly Fiorina at a Miami rally on Wednesday.

Rubio is currently fighting for his political life in the Sunshine State's primary on Tuesday. Lee's endorsement also bolsters Cruz's position in Utah, which votes on March 22nd. Polls indicate a tight race there between Cruz and Rubio.

Despite the two recent endorsements, Rubio far outpaces Cruz in endorsements from members of Congress and other top Republicans. Cruz is unpopular among his Senate colleagues due to his at-times brash theatrics and tendency to buck party leadership.

Lee's move could portend other GOP Senate endorsements for Cruz, who increasingly believe he is the only candidate capable of stopping Donald Trump from capturing the nomination. Trump is still leading in the number of states won and in the delegate count, but Cruz, who was not at the press conference, is the only candidate who's shown the ability to beat the New York billionaire in multiple primaries.

Even South Carolina's Lindsey Graham, who recently joked that he could murder Cruz and be acquitted by their fellow senators, has hinted that he might be willing to soon fall in line behind the Texan.

"Ted Cruz is not my favorite by any means, and I don't wish him ill, but we may be in a position where we have to rally around Ted Cruz as the only way to stop Donald Trump," Graham told CBS News last week.

Though Lee told reporters he wasn't there to "trash-talk" any of Cruz's opponents, he did say he has many unanswered questions about Trump's record and policy positions."I'm still waiting to hear a lot of things--I still don't know about what motivates Donald Trump, about what informs his policy positions ... and I don't have answers to almost any of those questions," Lee said.

Asked whether stopping Trump will require Republicans to choose their nominee at a contested convention in July, Lee said it's too early to tell and that there's still time for another strong candidate to pick up momentum.

"I think it's too early to predict that--I wouldn't say we're to that point," he said. "I think a clear leader could still emerge in the field."

Noting that the "overwhelming majority of Senators" had not yet end