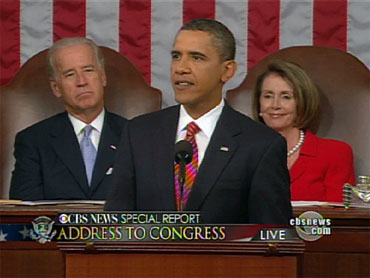 (CBS)
President Obama on Wednesday night logically and thoroughly explained his proposed health care reforms, but he capped off his nearly 5,500-word speech with an emotional appeal, evoking the memory of the late Sen. Ted Kennedy.

Near the end of his address to a special joint session of Congress, Mr. Obama revealed that he had recently received a letter from the senator, who had made health care reform the cause of his life. Kennedy wrote the letter to the president in May, after he was diagnosed with terminal brain cancer, but he instructed for it to be delivered only after his death.

Mr. Obama told the Congress that in his letter, Kennedy expressed confidence that health care reform would finally pass this year. Kennedy called it "that great unfinished business of our society."

"What we face," Kennedy wrote, "is above all a moral issue; at stake are not just the details of policy, but fundamental principles of social justice and the character of our country."

Mr. Obama remarked that he has thought about that phrase -- "the character of our country" -- quite a bit in recent days.

"One of the unique and wonderful things about America has always been our self-reliance, our rugged individualism, our fierce defense of freedom and our healthy skepticism of government," the president said. "And figuring out the appropriate size and role of government has always been a source of rigorous and sometimes angry debate."

While some may have seen Kennedy's brand of liberalism as nothing more than a passion for big government, the senator's passion for health care reform, Mr. Obama said, stemmed from his own experience of having two children who suffered from cancer.

"He never forgot the sheer terror and helplessness that any parent feels when a child is badly sick," the president said, "and he was able to imagine what it must be like for those without insurance."

"That large-heartedness – that concern and regard for the plight of others – is not a partisan feeling," he said. "Our ability to stand in other people's shoes. A recognition that we are all in this together; that when fortune turns against one of us, others are there to lend a helping hand."

Below is the text of the letter from Kennedy referenced by the president in tonight's address, as provided by the White House:

I wanted to write a few final words to you to express my gratitude for your repeated personal kindnesses to me – and one last time, to salute your leadership in giving our country back its future and its truth.

On a personal level, you and Michelle reached out to Vicki, to our family and me in so many different ways. You helped to make these difficult months a happy time in my life.

You also made it a time of hope for me and for our country.

When I thought of all the years, all the battles, and all the memories of my long public life, I felt confident in these closing days that while I will not be there when it happens, you will be the President who at long last signs into law the health care reform that is the great unfinished business of our society. For me, this cause stretched across decades; it has been disappointed, but never finally defeated. It was the cause of my life. And in the past year, the prospect of victory sustained me-and the work of achieving it summoned my energy and determination.

There will be struggles – there always have been – and they are already underway again. But as we moved forward in these months, I learned that you will not yield to calls to retreat - that you will stay with the cause until it is won. I saw your conviction that the time is now and witnessed your unwavering commitment and understanding that health care is a decisive issue for our future prosperity. But you have also reminded all of us that it concerns more than material things; that what we face is above all a moral issue; that at stake are not just the details of policy, but fundamental principles of social justice and the character of our country.

And so because of your vision and resolve, I came to believe that soon, very soon, affordable health coverage will be available to all, in an America where the state of a family's health will never again depend on the amount of a family's wealth. And while I will not see the victory, I was able to look forward and know that we will – yes, we will – fulfill the promise of health care in America as a right and not a privilege.

In closing, let me say again how proud I was to be part of your campaign- and proud as well to play a part in the early months of a new era of high purpose and achievement. I entered public life with a young President who inspired a generation and the world. It gives me great hope that as I leave, another young President inspires another generation and once more on America's behalf inspires the entire world.

At the Denver Convention where you were nominated, I said the dream lives on.

And I finished this letter with unshakable faith that the dream will be fulfilled for this generation, and preserved and enlarged for generations to come.