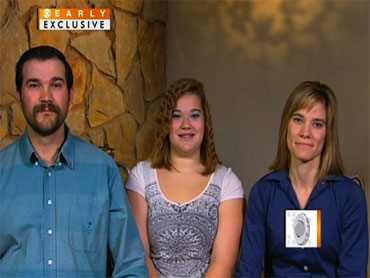 A father and his teenage daughter are thankful to be alive after being stranded in the snowy mountains of northern Idaho last week. Their terrifying ordeal was all documented on the 14-year-old's video camera.

It was supposed to be a one-day hunting trip. But after they got stuck on the mountain, it turned into a three-day struggle for survival against Mother Nature and the odds.

A flat tire left Matthew Gering and daughter Kia stuck on a remote mountain road, with little food and water, wondering if they'd ever be found.

Kia said, "The first night, I bawled my eyes out and was like -- what if they don't come?"

Their little camp was blanketed by two feet of snow and dad and daughter did what they could to stay warm and survive, even hunting an elk for food. As the days turned into freezing nights, they had no way of knowing a search was under way to bring them home.

After much anxiety and apprehension, finally -- on day three -- they heard the sound of a helicopter circling overhead.

Kia responds, "They found us. I'm so happy."

And all the while, Kia kept her video camera rolling, even as they climbed aboard the rescue chopper.

Kia said in the helicopter, "I'm just excited that we're rescued. It's a good thing. Now we gotta go back and see our family. Everybody's there. I'm excited."

And on "The Early Show," from their home in Post Falls, Idaho, Kia, Matthew and Matthew's fiancée, April Lyons, shared their story.

"We had food, water, we had an ATV. We also had resources to try and get out on," he explained, "So, it was kind of one of those inconveniences, 'Oh, ho hum, we'll be OK, anyway." '

At home, Lyons said, she was hopeful all was well.

She said, "I was just hoping that maybe Kia had hit something and they were going to have to go track it the next day and knowing that Kia had to be back early for a concert at the high school that they were just going to sleep in the truck overnight and go track the next morning and be back."

"Early Show" co-anchor Harry Smith said, "That turns into a second day, which turns into a third day and you did some detective work on your own because they said, we can't just helter-skelter look everywhere up there. You kind of figured out where they might have gone, right?"

Lyons said, "We, Matt's sister and I, got online and figured out what Matt's hunting tag, the areas it covered on the river that they were on."

As time passed, however, Kia said hope turned to despair.

She said, "During the daytime I was really hopeful and, all right, you know, people are going to be looking for us during the day. At night, I was just kind of like, well, it's nighttime, you know, cold temperatures. I was probably like they are probably not going to be looking for us at night. I was hopeful that people were coming but what I didn't -- but what I was least hopeful about was how long it was going to take them."

Kia said she began to videotape the experience for something to do, but it turned into something for the family.

She explained, "As I started videotaping more, it was kind of more of a, well, you know, if something happens to us, this is something that our family can watch to, you know, see what our time was like."

Matt said he got really concerned the last night.

He said, "I didn't sleep. I was pretty concerned, because of I knew that something was wrong. We hadn't seen search and rescue yet. And my biggest concern was I knew that I could make it out, but I didn't think Kia would. But, I also knew that I couldn't leave her behind. So, we were kind of between a rock and a hard place."

Kia said when she heard the helicopter she almost cried tears of joy.

She said, "I ended up not crying, actually, until I saw my family."