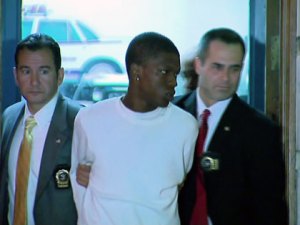 (CBS/AP) NEW YORK - Teenager Rondell Pinkerton, accused of fatally shooting a 4-year-old in the Bronx, was indicted on murder and other charges on Monday, reports CBS New York.

Pinkerton, 17, claimed that he was given a .45 caliber handgun by an older friend, shortly after arriving at the charity basketball game tournament held at the Forest Houses on Sunday, July 22, according to authorities.

After two men from a rival gang began shooting at him, Pinkerton allegedly returned fire, according to prosecutors.

In the crossfire, 4-year-old Lloyd Morgan who was in a nearby playground was shot in the head, police told CBS New York. He later died in the hospital, according to earlier reports.

Two other suspects in the shooting have already been arrested: Ronald Jeffrey from the Bronx and Courtney Kelly, according to CBS New York.

Pinkerton could face up to 25 years in prison, if convicted of murder.