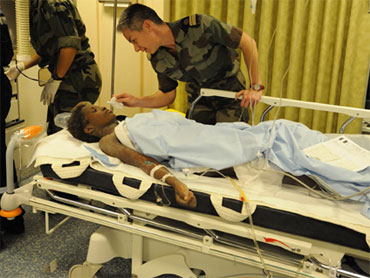 A 16-year-old girl pulled from the rubble more than two weeks after a deadly earthquake was in stable condition Thursday, able to eat yogurt and mashed vegetables to the surprise of doctors, who said her survival was medically inexplicable.

Hundreds of thousands of other survivors hoped for a breakthrough of another kind - the delivery of badly needed food aid.

Key players in the Haiti earthquake relief effort, in what may prove to be a pivotal meeting Wednesday, decided to better coordinate by dividing up the shattered capital, giving each responsibility for handing out food in certain areas.

Food distribution thus far has often been marked by poor coordination, vast gaps in coverage, and desperate, unruly lines of needy people in which young men at times shoved aside the women and weak and took their food.

"These things should be done in a systematic way, not a random way," Dr. Eddy Delalue, who runs a Haitian relief group, Operation Hope, said Wednesday of the emergency food program. "It's survival of the fittest: The strongest guy gets it."

Wednesday's rescue of teenager Darlene Etienne from a collapsed home near St. Gerard University, 15 days after Haiti's great quake killed an estimated 200,000 people, was the first such recovery since Saturday, when French rescuers extricated a man from the ruins of a hotel grocery store.

Etienne is stable, drinking water and eating yogurt and mashed vegetables, said Dr. Evelyne Lambert, who has been treating the girl on the French Navy hospital ship Sirocco, anchored off the shore of Port-au-Prince.

Lambert said that Etienne has a 90 percent chance of survival.

"We cannot really explain this because that's just (against) biological facts," Lambert told a news conference. "We are very surprised by the fact that she's alive. ... She's saying that she has been under the ground since the very beginning on the 12th of January so it may have really happened - but we cannot explain that."

Etienne may have had some access to water from a bathroom of the wrecked house, and rescuers said she mumbled something about having a little Coca-Cola with her in the rubble.

Experts say it's unclear how long people can survive with little or no water.

"It depends on so many variables - on temperature, on how hydrated she was when she got into this situation," said Randall Packer, a biology professor at George Washington University and an expert on salt and water balance. Packer also said Etienne's youth was likely to have helped her survive.

Even when fluids are withdrawn for terminally ill patients, "it can take a week or a little bit more for them to die," he said.

Her family said Etienne had just begun studies at St. Gerard when the disaster struck, trapping dozens of students and staff in the rubble of school buildings, hostels and nearby homes. "We thought she was dead," said cousin Jocelyn A. St. Jules.

Then - a half-month after the earthquake - neighbors heard a voice weakly calling from the rubble of a private home down the road from the destroyed university. They called authorities, who brought in the French civil response team.

French search and rescue team member Dr. Claude Fuilla walked along the dangerously crumbled roof, heard her voice and saw a little bit of dust-covered black hair in the rubble. Clearing away some debris, he reached the young woman and saw she was alive - barely.

Digging out a hole big enough to give her oxygen and water, they found she had a very weak pulse. Within 45 minutes they managed to remove her, covered in dust.

"She was in very bad shape," Fuilla said Thursday. "We had to rehydrate her for 15 minutes" before flying her by helicopter to the Sirocco. "Now, her condition is stabilized. She ate. She is speaking ... She is not very lucid, but she is OK."

At least 135 people buried in rubble have been rescued by search teams since the quake, most in the immediate aftermath. An Israeli team that earned international praise for its rescue efforts in Haiti returned home Thursday with a 5-year-old boy in need of urgent heart surgery.

Back in Haiti, the United Nations World Food Program urgently appealed to governments for more cash for Haiti supplies - $800 million to feed 2 million people through December, more than quadruple the $196 million already pledged.

But food remains scarce for many of the neediest survivors. Relief experts said the scale of this disaster and Haiti's poor infrastructure are presenting unprecedented challenges, but Haitian leaders complain coordination has been poor.

The WFP also noted that rising tensions and security incidents have hampered deliveries. Desperation boiled over earlier this week as young men rushed forward to grab U.S.-donated bags of beans and rice. A pregnant woman collapsed and was trampled.

Since the relief effort's first days, however, other problems have also delayed aid: blocked and congested roads, truck shortages, a crippled seaport and an overloaded airport.

The south pier near Port-au-Prince - the fastest route for moving large pallets of food and medical supplies into Haiti - was more badly damaged than U.S. officials realized and won't be repaired for another eight to 10 weeks, Gen. Douglas Fraser, head of U.S. Southern Command, said Thursday. At the moment, troops are only able to move 200 containers a day from ships anchored offshore using connectors, landing craft and helicopters, Fraser said.

Meanwhile, looting remained a constant threat in Port-au-Prince. A block away from U.S. troops who were knocking down the remaining walls of otherwise collapsed buildings, thieves armed with sledgehammers smashed what was left of destroyed shops Thursday, making off with everything from candy to perfume.

With the country still barely functioning, Haitian President Rene Preval canceled legislative elections scheduled for next month. The Parliament building partially collapsed in the earthquake, killing one senator, and other candidates also died in the disaster.

"We don't need elections right now," said 37-year-old store clerk Martine Poulard. "Elections cost a lot. They should use the money to feed the people who are starving in the streets, and they need to build houses for the homeless as well."