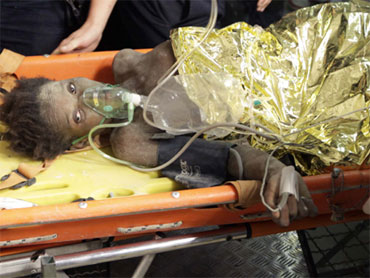 French rescuers pulled a teenage girl - very dehydrated, with a broken left leg and moments from death - from the rubble of a home near the destroyed St. Gerard University on Wednesday, a stunning recovery 15 days after an earthquake devastated the city.

"She's alive!" said paramedic Paul Francois-Valette, who accompanied her into the hospital.

Authorities say it is rare for anyone to survive more than 72 hours without water, little alone more than two weeks. But Etienne may have had some access to water from a bathroom of the collapsed home, and rescuers said she mumbled something about having a little Coca-Cola with her in the rubble.

Her family said Etienne, 17, had just started studying when the disaster struck, trapping dozens of students and staff in the rubble of school buildings, hostels and nearby homes.

"We thought she was dead," her cousin, Jocelyn A. St. Jules, said in a telephone call with The Associated Press.

Then - half a month after the earthquake - neighbors on Wednesday heard a voice weakly calling from the rubble of a private home down the road from the collapsed university. They called authorities, who brought in the French civil response team.

Rescuer Claude Fuilla then walked along the dangerously crumbled roof, heard her voice and saw a little bit of dust-covered black hair in the rubble. Clearing away some debris, he managed to reach the young woman and see she was alive - barely.

Digging out a hole big enough to give her oxygen and water, they found she had a very weak pulse. Within 45 minutes they managed to remove her, covered in dust. Fuilla said she was rescued from what appeared to be the porch area of the house, but a neighbor said he believed it was the shower room, where she might have had access to water.

Another rescuer, French Lt. Col. Christophe Renou, said he had no idea how she had managed to cling to life for so long: "Definitely she's been here for 15 days. She wasn't hurt but she was very, very weak."

Renou said his team would probably return Thursday with radar equipment to look for any other possible survivors.

French Ambassador Didier le Bret praised the persistence of the French rescue team, which has kept looking for survivors for days after the Haitian government officially called off the search.

"They are so stubborn because they should not have been working anymore because, officially, the rescue phase is over. But they felt that some lives still are to be saved, so we did not say that they should leave the country," he told Associated Press Television News.

"To be honest we thought that the last miracle we had a couple of days ago ... would be the last miracle because the chances are so very, very slight. But it seems that beyond the miracle, there was another miracle."

The last previous confirmed rescue of someone trapped by the initial quake occurred Saturday, 11 days later, when French rescuers extricated a man from the ruins of a hotel grocery store. A man pulled Tuesday from the rubble of a downtown store later and treated by the U.S. military for severe dehydration and a broken leg said he had been trapped during an aftershock.

At least 135 people have been unearthed by rescue teams since the Jan. 12 quake, and many more by relatives and neighbors. But most of these rescues were in the immediate aftermath and authorities say it is rare for anyone to survive more than 72 hours without water.

Watch video of the dramatic rescue below: