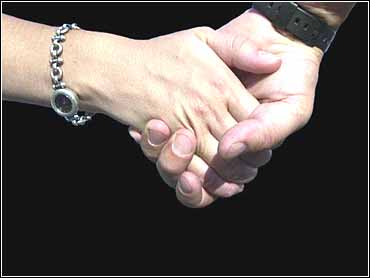 The number of married teenagers surged nearly 50 percent during the 1990s, reversing a decades-long decline.

Marriage remains fairly uncommon in this age group — only 4.5 percent of 15- to 19-year-olds were hitched in 2000 — but researchers were nonetheless surprised by the increase reported by the Census Bureau.

"There's been a slight trend toward conservatism among teens, less premarital sex, more fear of disease," he said. "It could conceivably have something to do with welfare reform. But it's a surprise."

This generation of teens is the first to live their whole lives with AIDS as a major public health concern. Some counselors suggested wedded teens are taking to heart the "abstinence until marriage" theme projected by some sex education classes.

Some researchers attribute the surge during the 1990s to an influx of immigrants. Many came from areas where marriage is more common among teens — Latin America, Asia and sub-Saharan Africa.

"It's more like the U.S. in the 1950s. In a lot of these countries the median age of first marriage is lower than 20," said demographer John Haaga of the Population Reference Bureau, a nonprofit research group. "And of course in the United States the past decade, the immigrants came predominantly from Mexico and to a lesser extent Asia, so that could be one explanation for this."

At least two-thirds of married teens in 2000 lived apart from their spouse for various reasons; one may have been in jail, away in college or remaining in their homeland. However, the Census Bureau said many of the couples counted as living apart may have indeed been living together in places like dormitories or shelters but may not have been identified that way due to quirks in the way data was collected.

Martin O'Connell, chief of the bureau's fertility and family statistics branch, suggested some of the overall increase in teen marriages could also be attributable to the way information was gathered. In 1990, all census forms included a question on marital status. But in 2000, estimates of marital status were based on responses to the long census form distributed to only about 20 million homes.

Most states allow people to marry at age 18, with exceptions given in some places for people as young as 12 who have their own child, or who get parental approval. The 2000 census gathered data on marital status for people 15 and older.

Figures released last year from the National Center for Health Statistics found nearly half of marriages in which the bride is 18 or younger end in separation or divorce within 10 years. For brides 25 and older, half as many marriages break up.

Jodie Levin-Epstein, deputy director of the liberal-leaning Center for Law and Social Policy, said social and political changes may have prompted more teens to marry in the 1990s. For example, couples in some states may have married to take advantage of programs established through the 1996 welfare program overhaul.

"It would seem inappropriate in this economy that requires substantial educational achievement to promote marriage among teenagers," Levin-Epstein said. "While for some young couples a marriage may work well, the earlier the marriage, the likelier the divorce."