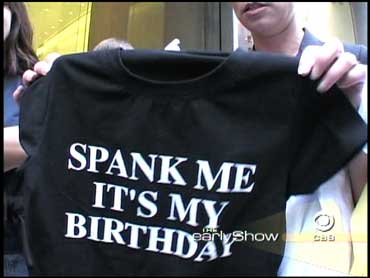 If you want to read something really steamy, you may not have to look any further than your daughter's wardrobe. Sexually suggestive T-shirts are very popular among teens and can be found in trendy clothing stores all over the country.

One extols the virtues of the wearer's backside. It reads: "Yes I have a nice ass."

"Not appropriate for my daughter. No," one mother told The Early Show national correspondent Tracy Smith.

Her daughter said she would never wear a shirt like that, but her friends probably would.

"That's the culture sucking them in," a father said.

Another shirt read: "Spank me, it's my birthday."

"I would wear that," a teenage girl said.

None of this surprises the people like Amanda Freeman, a vice president at the Intelligence Group, who keep track of teen trends.

"This is a generation that has no interest in privacy and so they're willing to publicize what they think and feel and whether it's provocative T-shirts that have political references or sexual references — whatever they think that's what they want to wear," she said.

In a message-driven world, a T-shirt is a way to let the world know who you are or at least what you're thinking. It's also a way for girls to get attention from guys.

"You know, kids have always looked for attention and part of what teens do is say, 'Look at me' and they are starting to form their identity," said David Walsh, president of the National Institute on Media and the Family. "But kids also are always ones to push the limits. That's the job teens have. It's the adult's role to set limits so they have something to push against. So adults have the responsibility to draw the line and say, 'That's over the line, you can't wear that.' "

Walsh said parents need to draw the lines while trying to avoid a battle and sometimes agree to disagree. Parents also need to set ground rules and not count on teachers to tell kids what is inappropriate.

"We have to be willing to say no when necessary," he said. "We can't just rely on the schools to do that. One of the things that's easiest is let schools do the heavy lifting, but we need to team with schools … The message we want to give our kids is we want them to treat others with respect and we want them to be respected, not to be seen as a toy."