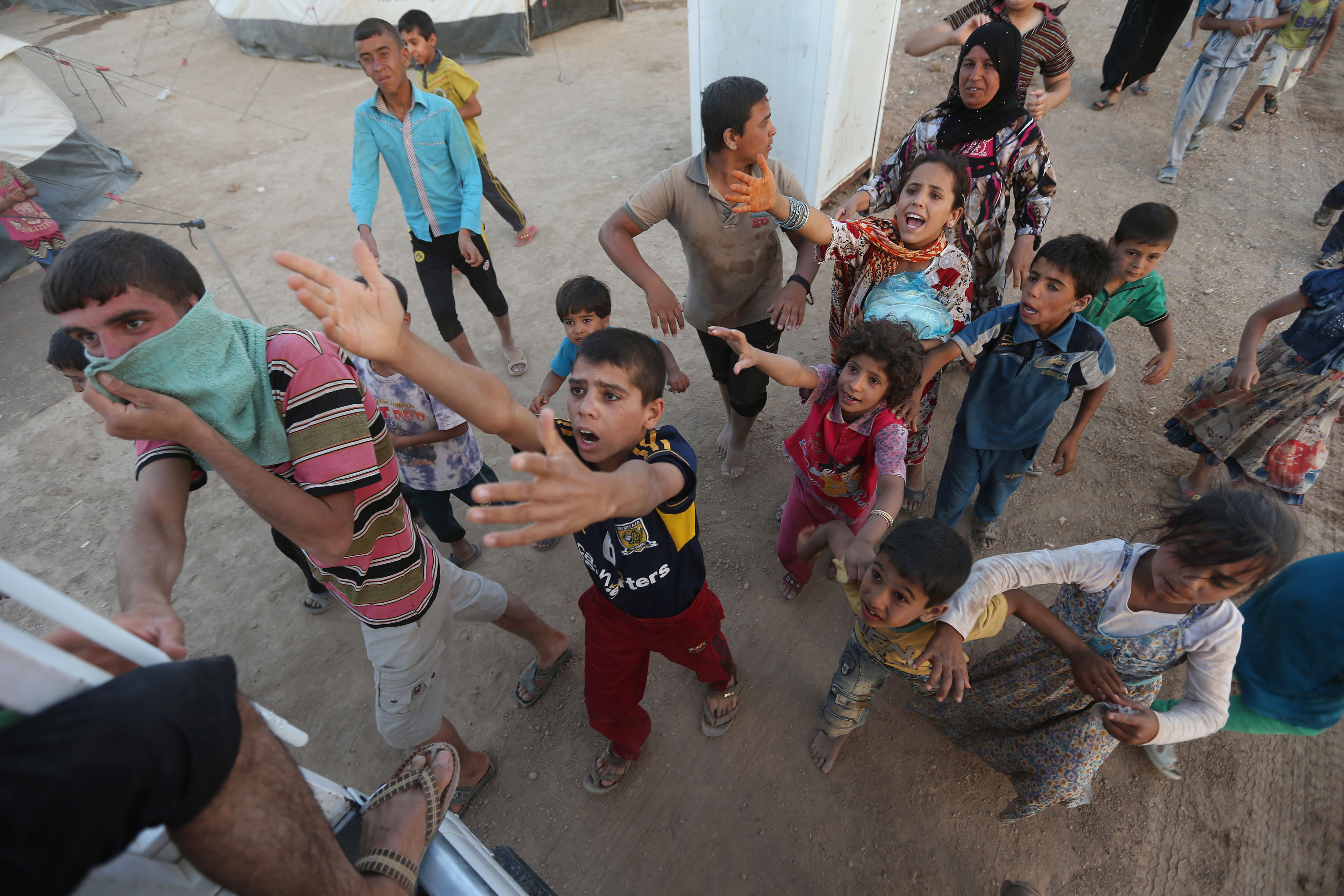 KALAK, Iraq -- Waving pots and pans, police pushed back dozens of hungry Iraqi refugees as they rushed to seize free food, ending their first daylong fast of the holy Muslim month of Ramadan in an encampment for the displaced.

Shouting men scrambled Sunday to reach pots of rice, meat and chicken stew in this dusty, hot encampment some 60 miles from the northern city of Erbil, the capital of Iraq's self-ruled Kurdish region. The chaotic scene underscored the fearful insecurity of displaced Iraqis as they begin Ramadan in a nation gripped by unrest and bitterly divided along sectarian lines.

The Iraqi military's offensive against ISIS stalled over the weekend during an assault on the jihadist-held city of Tikrit, reports CBS News correspondent Charlie D'Agata.

For Bashir Khalil, a 39-year-old Shiite, and his wife Nidal, a Sunni, Ramadan has been robbed of its rhythm of communal solidarity.

The couple, who fled Iraq's second-largest city of Mosul after it was captured by Sunni extremists earlier this month, has always been poor. But in their impoverished quarter of the city, neighbors shared their food. Here, when the food ended, there would be no more until another charity came by.

"When this food finishes, there'll be nothing else," 34-year-old Nidal Khalil lamented.

She and her husband fled after Sunni militants of the Islamic State of Iraq and Syria (ISIS), who consider Shiites apostates, interrogated them. He was under suspicion as a Shiite, and she was questioned because she worked as a cleaner in a Shiite charity.

They returned days later after receiving assurances from local gunmen that they wouldn't be harmed, but found their home had been damaged in clashes.

"We don't want this one or that one," said Nidal Khalil, referring to the Shiite-dominated government and the Sunni insurgents. "Neither of them cares about us poor people."

Her mother-in-law, Shamsa, sat nearby, smoking a cigarette. Fasting Muslims are not supposed to smoke, eat or drink during daylight hours, but the 70-year-old woman shrugged and said she couldn't fast in the heat.

Though Bashir Khalil did not manage to get any of the food donated by a local television station, his 10-year-old daughter, Sara, shared the bag filled with containers of soup, rice and meat that she managed to grab in the melee.

At the encampment's edge, it was quiet in tent D42, where Umm Mishal watched the sun sink over the horizon alongside her youngest daughter Amal, who wore a torn red dress.

"Ramadan is a generous, blessed month. We will not go hungry," the 49-year-old woman said, even as she complained that other families had taken more than their fair share of the donated food, chaotically distributed off the back of trucks.

"They have grape juice," she said, pointing at another family.

Then, on a plastic sheet emblazoned with the United Nations' logo, she set out three tubs of soup, three plates of rice, a loaf of bread, a small roasted chicken and sliced watermelon.

The evening's meal was taken care of. Suddenly giddy, she exclaimed, "God has blessed us!"

"Eat some chicken!" she said with a giggle.