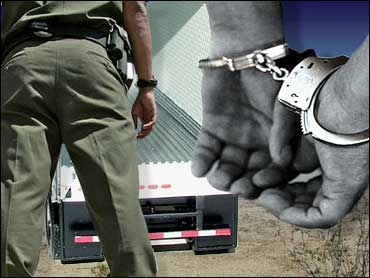 This column was written by The Editors.

The Senate isn't serious about enforcing the nation's immigration laws. It is bad enough that the bill that 39 Democrats and 23 Republicans just voted to pass provides an amnesty to illegal immigrants already here. There might be an argument for doing that if there were any evidence of a commitment to enforce the immigration laws in the future. But the bill actually prohibits local police from enforcing civil violations of immigration laws —which in practice, given the byzantine rules distinguishing between civil and criminal violations of those laws, will get local police out of the enforcement business altogether. No serious effort is being made to make the bureaucracy capable of the enforcement tasks that will now be asked of them, such as performing background checks on the illegal population.

The bill forbids the federal government to use any information included in an application for amnesty in national-security or criminal investigations. Any federal agent who does use that information would be fined $10,000 — which is five times more than an illegal alien would have to pay to get the amnesty. The Senate, on a tie vote, defeated John Cornyn's (R-Texas) attempt to rectify these provisions.

When Sen. Johnny Isakson (R., Ga.) offered an amendment to require that enforcement be proven to have succeeded before the amnesty or guest-worker provisions could take effect, he was voted down, 55-40. For most senators, enforcement is just boob bait for the voters. They are not willing to demand it before getting what they, for various reasons, really want: an amnesty and a massive increase in legal immigration.

Sen. Jeff Sessions (R., Ala.) wanted to deny illegal immigrants the earned income tax credit. It is one thing to legalize them, went the argument, and another to subsidize them. He, too, was voted down, with Sen. John McCain (R., Ariz.) flippantly suggesting that the amendment was akin to requiring illegals to ride in the back of the bus. (No, senator: They're in the front of the line, at least for legal residency in the U.S.)

The "temporary" guest-workers will be eligible for citizenship. If they overstay their welcome, there is no guarantee they will be deported — especially when Congress will have signaled, by passing this bill, its view that deportation is draconian. So these "temporary" workers will permanently change America. Robert Rector of the Heritage Foundation estimates that the bill would make for an inflow of 66 million immigrants over the next 20 years. Since much of this inflow would consist of poor and relatively uneducated people, one result would be, he says, the largest expansion of the welfare state in 35 years. (And he's not accounting for the likely effects of these people's votes.) Another very likely result would be the increased balkanization of America, as this massive inflow slows both economic and cultural assimilation.

If supporters of the Senate bill were serious about securing the border, they would have considered following a strategy of attrition — of stepping up enforcement of the immigration laws so as to shrink the illegal-immigrant population over time — and, if they ultimately rejected that strategy, explained why. Implicit in their arguments for amnesty and a guest-worker program is one possible objection to the attrition strategy: that the American economy needs more cheap, unskilled labor. Proponents of mass immigration boast that immigration brings a net benefit of $10 billion to the American economy. But this amount is, in the context of our $13 trillion economy, trivial. Reduced immigration would lead to some increased outsourcing, some substitution of machines for labor, some increased wages, and some higher prices. The economy would survive.

So will Republicans, if they reject this bill (as most Senate Republicans did). They are being told that they need to pass a bill, even if they dislike many of its provisions, to be seen as "doing something" about the border. But the voters who care the most about this issue know that the Senate bill does something they heartily detest. They know that the only way to get any enforcement of our immigration laws — at the border or the workplace — is to keep all of the interests that want increased immigration from getting what they want until enforcement is achieved. The Senate should stand down in favor of the House's enforcement-first approach, not the other way around. But it would be much better to enact no bill than to enact the Senate bill.