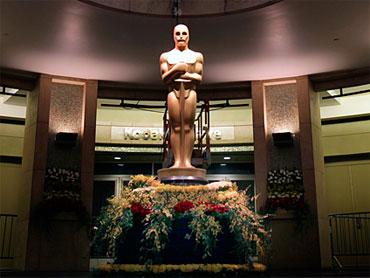 (CBS/AP) The Academy Awards show viewers elegance and splendor, but it's those crazy and spontaneous moments that remain etched in our minds.

In honor of the Oscars' 10 Best Picture nominees, we've decided to look back at the 10 most bizarre moments in the show's history.

The streaker (1974): A naked man runs across the stage as British actor David Niven is about to introduce Elizabeth Taylor. The audience responds with roaring laughter. Niven remains un-phased and says, "Well, ladies and gentlemen, that was almost bound to happen. But isn't it fascinating to think that probably the only laugh that man will ever get in his life is by stripping off and showing his shortcomings?" Watch the video here.

Marlon Brando sends Sacheen Littlefeather on stage (1973): When Brando won Best Actor for his portrayal of Vito Corleone in "The Godfather," he refused to accept the award. Instead, Sacheen Littlefeather, a woman claiming to be Apache, spoke on his behalf. Brando thought he was protesting the stereotypical treatment of Native Americans in the film industry. Her speech received a mixed response, and people questioned her own ethnic background.

Rob Lowe's duet with Snow White (1989): Allan Carr took over as producer of the Academy Awards. He was the man behind hit musicals such as "Grease" and "Can't Stop the Music." He won a Tony for the Broadway hit "La Cage aux Folles." Despite producing some timeless classics, his Oscar ceremony was a disaster. There was a 20-minute opening dance number with a squeaky-voiced Snow White-lookalike singing "Proud Mary" with Lowe, who at that time was dealing with a sex-tape scandal. This performance is considered one of the biggest flops in the show's history, and surprising because of Carr's resume.

Bjork's swan dress (2001): Icelandic singer and actress Bjork shocked everyone on the red carpet when she dressed in a white, fluffy gown with a swan's head draped around her neck. This infamous dress continues to be engraved in our heads - it's that outrageous. She was nominated for Best Original Song for "I've Seen It All" from Lars von Trier's "Dancer in the Dark." After her red carpet appearance, we truly have seen it all.

Jack Palance's one armed push-ups (1992): Palance was nominated twice before for Best Supporting Actor for "Sudden Fear" (1952) and "Shane" (1953). Four decades later, he won the award for the comedy "City Slickers." At 72, in the middle of a raunchy acceptance speech in which he explained how reluctant producers can be to cast older actors, Palance dropped to the stage and did a series of one-armed push-ups, proving that age is nothing but a number.

Roberto Benigni's seat climbing (1999): Benigni, the Italian actor and director, literally leaped for joy when he won the Oscar for Best Foreign Language film "Life Is Beatiful." He jumped from one seat to another, whipping the audience into a frenzy, before going on stage and giving Sophia Loren a long, tight bear hug. ("Life Is Beautiful" also earned a Best Actor Oscar for Benigni and one for its original score.) Watch the video here.

"Dances With Wolves" beating "Goodfellas" for Best Picture (1991): A decade later, history repeats itself when the Academy gets it wrong and Scorsese is on the losing end. Although Kevin Costner's "Dances With Wolves" is a sweeping epic and visually impressive in its enormity, it feels condescending and even a little corny. On the other hand, "Goodfellas" is an example of Scorsese's virtuoso film making at its finest -- funny, brash and always riveting. Scorsese eventually got his due with Oscars for Best Picture and Best Director for "The Departed" (2006).

You like Sally Field (1985): After winning Best Actress for "Norma Rae," Field won her second Best Actress Oscar for "Places in the Heart." In her acceptance speech, she clutched the golden statue, giddy and beaming, saying that she finally felt the respect of her peers. She uttered the infamous line, "I can't deny the fact that you like me. Right now, you like me," a line that would be endlessly parodied and misquoted.

The "South Park" guys show up in drag (2000): Directors Trey Parker and Matt Stone arrived to support their feature film, "South Park: Bigger, Longer and Uncut." It earned Parker and Marc Shaiman an Original Song nomination for "Blame Canada." Stone dressed in a replica of the pink gown Gwyneth Paltrow wore a year earlier when she won Best Actress for "Shakespeare in Love," while Parker wore a knock-off of the plunging green Versace number Jennifer Lopez famously filled out at the Grammys. Although in drag, Parker and Stone were anything but a drag at the Oscars.