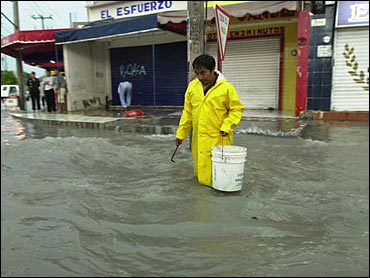 The National Hurricane Center issued a hurricane watch Sunday for the South Texas coast as Tropical Storm Claudette gained strength in the Gulf of Mexico.

The storm was expected to make landfall at near hurricane strength as early as Tuesday, said Miles Lawrence, a forecaster with the center in Miami.

Sunday morning, Claudette was about 315 miles east of Brownsville and moving at about 7 mph to the west-northwest. Its maximum sustained winds had increased to 60 mph, 14 mph shy of hurricane strength.

The hurricane watch was issued for the Texas coast from Port O'Connor, about 70 miles northeast of Corpus Christi, to Brownsville, along the Mexican border. Mexican authorities issued a hurricane watch from the border to Rio San Fernando.

Claudette is the third tropical storm of the Atlantic hurricane season. It developed Tuesday in the Caribbean, brushing Jamaica's southern coast with heavy rain and rough surf, battering the Cayman Islands with dangerous waves and above-normal tides and scattering rain over parts of Cuba before arriving in Mexico.