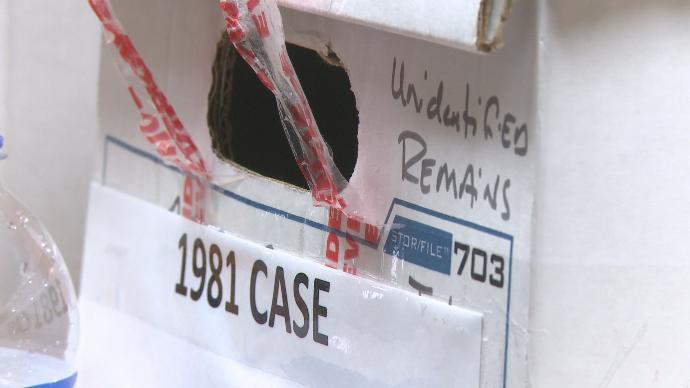 IOLA, Texas -- There's a case that has been haunting former detective John Leflore for almost four decades. It began in 1981, he says, when a human head rolled out of a garbage bag left alongside a Texas farm road, startling the local highway worker who had stopped to pick it up.

When detectives examined the bag, they discovered the remains of a teenage girl who they believe had been dead between three and six months.

"We don't forget that," said Leflore, speaking to KBTX reporter Whitney Miller on a narrow stretch of farm road 244 in Iola, Texas, where the victim's body had been tossed into a deep ravine. "No one deserves to be left like trash."

At the time, a confessed serial killer, Henry Lee Lucas, claimed he and a friend, Ottis Toole, committed the murder. Both had been convicted of multiple counts of murder in other cases and later died in prison.

"He said yeah and while I was choking her, Ottis beat her with a tire tool," Leflore told KBTX. "Nobody would have known that because her hand is broken and a tire tool would fit right in that broken hand and her skull had the marks."

Despite the confession, no one was ever charged with the murder. That decision would have been made back in 1984 by prosecutors who are long gone, Lt. Daniel Wagnon of the Grimes County Sheriff's Department told Crimesider. The suspect is now dead, and "we are just trying to identify [the] victim," he said.

Lucas, who died in 2001, was convicted of 11 homicides in his lifetime-- but confessed to killing up to 3,000 people, in what former Texas Attorney General Jim Mattox called a "hoax."

Lucas had called the young woman "Cheryl," but told detectives he didn't remember her last name.

"I'd like to find out who she is. I think her parents and her family definitely deserves to have her back," said Leflore.

Wagnon is now working with the University of North Texas to test the victim and items found around her for DNA matches, reports the station.

"She was small in stature she was probably five foot three, we believe she had auburn hair, which we are testing now," Wagnon told KBTX.

Wagnon told Crimesider that the victim's DNA is in CODIS, a national database, "but it has never hit any matches to a family member." He requests that anyone who had a family member go missing in the late 70s to early 80s to "go back to their local law enforcement agency where they reported it and get their DNA submitted."

"Basically, we have to have something to compare to," he said, adding that people should not think that any details are inconsequential, or assume that officers already have certain information.

The only thing found with her body was a popular 1904 coin medallion ring.

During interviews, Lucas told investigators he had picked the woman up on the outskirts of Durham, North Carolina, Wagnon told Crimesider. But they don't know for certain where she was from.

"As time goes by its going to be harder and harder to find any leads or witnesses that are still alive or new clues that can come up because science can only solve so much," Leflore told KBTX.