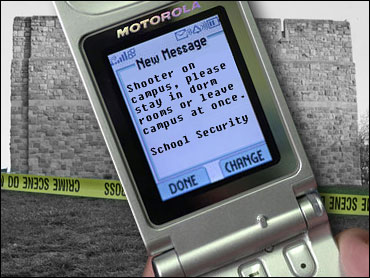 Officials at Virginia Tech used email to notify students and community members that a shooter was on campus, but in addition to the fact that the first message was sent more than two hours after the first attack, email messages likely wouldn't reach many of the intended recipients for hours.

That's because, unlike Blackberry touting business executives and politicians, most students don't check their email constantly throughout the day. Students aren't always deskbound and when the shootings were taking place, some were walking on campus, others were in class while others were on their way to school.

At the University of Texas in Austin, scene of a deadly shooting back in 1966, university officials have the capability of notifying students and community members via text-messages that go directly to student and staff cell phones.

The University has signed a deal with Mobile Campus, an advertiser-supported service that allows administrators not only to send out emergency notices but also more mundane communications such as band practice or class cancellations.

Other campuses that work with the service include Kent State, also scene of a tragic shooting along, with Clemson University, University of Florida, Texas State and Santa Fe Community College among others.
.
The service itself is free to universities and to students but cell phone companies typically charge users a small fee per message received and sent, unless users subscribe to plans allowing a certain number of monthly messages.

to hear Larry Magid's podcast interview on texting versus e-mail.

Mobile Campus makes its money, according to Chief Operations Officer Roy Eder, by charging advertisers to deliver targeted messages to students and other members of the campus community. Students have the option of selecting categories of offers that they wish to receive such as a discount at a local pizza shop or an electronic coupon from a national brand.

Students can also opt in to receive notification from campus groups and, of course, University administrators. The service is entirely opt-in and students get a maximum of two merchant messages a day. There are no maximums on alerts and notifications.

Had Virginia Tech used this service on Monday, said Eder, "after the first shooting, the administration could have sent out a text message to all students who had opted into the program," telling them to "stay away from campus for those people who commute and to stay in a safe place for those already on campus."

Eder suggests that had such a system been used in a timely manner, "possibly somebody would have spotted this person walking the half-mile between the two buildings and could have reported it to the police." That is, of course, speculation but it does seem logical that timely warnings in situations like this could save lives.

University of Texas spokesperson Rhonda Weldon, said that the Mobile Campus service is one of several tools used on campus "We have an outdoor warning system … we would put it up on the web, we have building managers that carry pagers and another part of the toolbox is Mobile Campus. If there is an emergency, everyone who has subscribed to the service would be reached. The campus director of emergency preparedness is authorized to send out alerts."

Weldon notes that the service, which has between eight and nine thousand users on campus, was used on January 16th when the university was closed due to an ice storm.

In 1966, the University of Texas suffered what was, until Monday, the deadliest school shooting in U.S. history when a shooter attacked passers-by from the top of the 27 story University Tower.

Asked about the impact of that tragedy on UT's emergency planning Weldon said, "I think that once you have something like that happen at your campus I believe it's always something you remember as you plan. Part of our planning in emergency preparedness is to try as much as we possibly can to try to incorporate communications technologies because communicating with a campus of approximately 67,000 people who are in transit at any given time during the day is probably the biggest challenge to us as far as crisis communications."

Text messages are currently used to issue wireless amber alerts to inform people of a nearby missing child who may be in immediate danger. Anyone with a cell phone can go to www.wirelessamberalerts.org to register their mobile phone number to receive regional alerts. Participating carriers have entered into an agreement not to charge for incoming messages. The service is co-sponsored by the National Center for Missing and Exploited Children where I serve as an unpaid board member.

Text messaging is growing in popularity in the United States, especially among teenagers and young adults, and it is already extremely popular in Europe. The wireless trade association, CTIA, conducted a survey that found that 158 billion messages were sent in 2006 in the U.S. a 95% increase over 2005. Most cell phone companies now offer plans where you can purchase a "bucket" of incoming outgoing messages. Verizon Wireless recently announced a family plan with unlimited text messaging.
.
You need a cellular signal to receive a text message, so there's no guarantee that you'll receive it. However, it's often possible to get a text message even if you can't get or make calls. That's because all you need is a momentary connection to the cell service to receive a text message and, even in weak areas, there's a pretty good chance that a text message will get through at some point.

A syndicated technology columnist for over two decades, Larry Magid serves as on air Technology Analyst for CBS Radio News. His technology reports can be heard several times a week on the CBS Radio Network. Magid is the author of several books including "The Little PC Book."
By Larry Magid