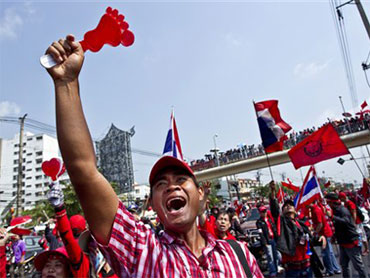 Thailand's prime minister, backed by a formidable military force, rejected an ultimatum to dissolve Parliament on Monday as tens of thousands of red-shirted protesters vowed to splatter the seat of government with their own blood if their demands weren't met.

Organizers of the demonstrations in the Thai capital said they're requesting that each protester donate between two and 20 teaspoons of blood - 10 to 100 cubic centimetres - to meet their goal of more than 2,000 pints (1 million cubic centimetres). That would require between 10,000 and 100,000 people - roughly the crowd's peak size - to donate.

"The blood will be taken from the body and democratic soul of the Red Shirts," said a protest leader, Natthawut Saikua, referring to the popular name for the protesters. He said they would start recruiting medical staff for the blood drive Tuesday morning.

They threatened to pour the blood on Government House if their renewed demand was rejected by 6 p.m. local time Tuesday.

A Red Cross official expressed concern over the hygiene of drawing blood from so many people and noted that such a large quantity "could save a lot of lives," if it weren't destined to be spilled.

In the first reported violence of the protests, two soldiers were wounded when four grenades exploded inside the compound of the 1st Infantry Regiment, known as the King's Own Bodyguard, said army spokesman Col. Sansern Kaewkamnerd.

He did not blame the demonstrators, who were not in the area, but said there has been intelligence that some elements had been planning such attacks. The grenades were fired from an M-79 launcher, he said.

Prime Minister Abhisit Vejjajiva, the key target of the massive demonstration, earlier said he could not give in to the protesters' demand to dissolve Parliament by midday but left room for compromise.

The demonstrators marshalled around the heavily defended 11th Infantry Regiment headquarters where Abhisit has been hunkered down in recent days, but after the deadline passed they began a march back to their main encampment.

"Asking for the dissolution of Parliament before noon in exchange for a halt to the demonstrations, we all agreed it can't be done. However, it doesn't mean the government coalition parties and I won't listen to their ideas," Abhisit said on nationwide television.

The protesters believe Abhisit took office illegitimately with the connivance of the military and other parts of the traditional ruling class who were alarmed by former Prime Minister Thaksin Shinawatra's popularity, particularly among the poor. Thaksin, who became prime minister in 2001 and whose party easily won two elections, was ousted by a 2006 military coup for alleged corruption and abuse of power.

Some 100,000 Red Shirt protesters have been camped out along a boulevard in the old part of Bangkok. A force of more than 50,000 soldiers, police and other security personnel has been mobilized in the capital area.

"Our goal is not to remain entrenched in the government. Like all Thais, we'd like to see the country move forward," Abhisit said. "The government must listen to the demonstrators. Although the demand can't be met by noon, we are willing to hear what they say."

With banners waving, thousands of the protesters piled into trucks, rode motorcycles or trudged on foot toward the barbed-wire ringed regimental compound where soldiers played songs composed by the Thai king in a bid to keep things calm. They began to leave a few hours later.

The troops guarding the headquarters were in full combat gear, but no weapons were visible except short-barreled rifles for firing tear gas.

City authorities feared traffic chaos in areas of the sprawling capital, but in other quarters, traffic was surprisingly light as many office workers stayed home for fear of violence. Some international schools were closed.

Dr. Ubonwon Charoonruangrit, a senior official of the Thai Red Cross Society, said the planned blood drawing was "very risky" when left to untrained people and warned that a needle could not be used twice.

"Protesters who have been out in the sun for so many days may be fatigued and sleep deprived, so it's not good to lose blood," the official said.

The protesters, formally grouped as the United Front for Democracy against Dictatorship, have been flexible in their tactics and deadlines, but are demanding Abhisit dissolve Parliament and call new elections, which they believe will restore their political allies to power.

Thaksin, the ousted prime minister, spoke to the rally by video link Sunday night, urging the crowd to continue their struggle peacefully, and emphasizing that he considered the so-called "ammart," or elite, the enemy. Thaksin himself is a billionaire businessman who fled Thailand in 2008 ahead of being convicted for a conflict of interest violation and sentenced to two years in jail.

"The people who caused the problems in the country these days are the ruling elites," declared Thaksin, speaking from an undisclosed location outside of Thailand. "To solve problems related to democracy, equality and justice - the ruling elites won't be able to do that because they don't have the conscience. The people will have to do it."

Thailand has been in constant political turmoil since early 2006, when anti-Thaksin demonstrations began. In 2008, when Thaksin's political allies came back to power for a year, his opponents occupied the prime minister's office compound for three months and seized Bangkok's two airports for a week.