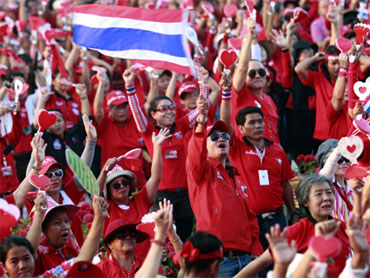 Thousands of red-shirted anti-government protesters converged on the Thai capital Bangkok on Saturday, giving the government an ultimatum to dissolve Parliament or face mass marches on key spots in the city.

Although protest leaders stressed they would not resort to violence in their quest to oust the government, many businesses closed, social events were canceled, and Bangkok's normally chaotic traffic was unusually light.

A force of 50,000 soldiers, police and other security personnel was mobilized in the capital area.

The "million-man march," which protest leaders said would end on Wednesday, is regarded by some as the last chance for ousted Prime Minister Thaksin Shinawatra to return to Thailand.

The "Red Shirt" protesters, formally known as the United Front for Democracy Against Dictatorship, are made up of followers of Thaksin, along with other people who oppose the 2006 military coup that toppled him.

Forcing the government out of power, Thaksin loyalists say, could pave the way for his pardon and return.

Thaksin, who resides in Dubai, faces a two-year prison term for abuse of power.

Thousands of protesters arrived in the sprawling capital on Saturday after travelling in trucks, buses and motorcycles from the Thaksin heartland - the impoverished rural northeast and the north where the fugitive leader was born.

There were no reports of violence.

Thailand has been in a state of constant political turmoil since early 2006, when demonstrations accusing Thaksin of corruption and abuse of power began.

In 2008, when Thaksin's political allies came back to power for a year, his opponents occupied the prime minister's office compound for three months and seized Bangkok's two airports for a week.

Recent polls in Bangkok indicate a large segment of the population, irrespective of their political beliefs, is fed up with the protests, which have battered the economy, including the lucrative tourism industry.

The Red Shirts have vowed to keep their protest nonviolent - and some in Bangkok carried roses that they handed to policemen.

"If there is any violence it won't come from our side," said Nattawut Sai-kua, a Red Shirt leader. "Since this morning, no weapons have been found on any Red Shirt demonstrators making their way from upcountry into Bangkok."

However, the group's last major protest in Bangkok in April deteriorated into rioting that left two people dead, more than 120 people injured, and buses burned on major thoroughfares. The army was called in to quash the unrest.

Many embassies have warned their citizens to stay away from areas of the city where violence could erupt.