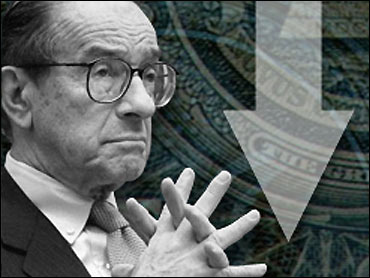 The Federal Reserve, worried about the sputtering economy, cut a key interest rate by a half point on Wednesday, marking its first rate reduction this year. The size of the cut came as a surprise. Most analysts expected a 1/4-point reduction.

After a closed-door meeting, the Federal Open Market Committee, the Fed's top policy-setting group, in a 12-0 vote decided to lower its target for the federal funds rate to 1.25 percent. The funds rate is the interest banks charge each other on overnight loans and is the Fed's main lever for influencing the economy.

"Today's additional monetary easing should prove helpful as the economy works its way through this current soft spot," the Fed said in a statement.

On Wall Street, the Fed announcement produced a moderate upswing in stock prices. In the first hour after the decision, blue-chip stocks jumped as much as 78 points, then tumbled 88 points lower before rising again to settle modestly higher. The Dow finished the day up 93 points. The Nasdaq gained 18 points and the S & P 500 advanced eight points.

"Investors are facing a challenging environment. On the one hand, they want higher liquidity associated with lower interest rates, but on the other hand, they don't want the negative implication ... that the economy is becoming bleaker," said Jack Caffrey, equities strategist at J.P. Morgan Private Bank.

The rate cut had been widely expected, but many analysts believed it would be only a smaller quarter-point move. In its statement, the central bank emphasized concerns about the economic recovery amid rising worries about how a possible war with Iraq would affect consumer and business confidence.

By lowering short-term interest rates, Fed policy-makers hope to motivate consumers to spend more and businesses to ramp up investment, something that would boost economic growth.

Some private economists question whether Wednesday's rate cut will have the desired impact given the Fed has kept borrowing costs at very low levels all year long. But other analysts believe the rate reduction will at least bolster consumer and business confidence as well as help lift spirits on Wall Street.

Commercial banks' prime lending rate — the benchmark for many consumer and business loans — moves in lockstep with the funds rate. As a result of the Fed's decision, many banks were expected to announce a similar half-point reduction, lowering the prime rate to 4.25 percent, which would be its lowest rate since May 1959.

Before Wednesday's action, the federal funds rate hadn't changed since Dec. 11. That marked the Fed's 11th rate cut in 2001, a year in which the central bank moved aggressively to try and rescue the country from its first recession in a decade and cushion the economic shocks from the terrorist attacks.

Last year, the Fed cut rates by a half-point eight times, using these larger reductions to signal its sense of urgency that the economy needed help. Three of the half-point moves came in the weeks immediately following the Sept. 11 terrorist attacks.

The latest Fed rate reduction Wednesday comes amid fears among private economists that the economic recovery — which has been advancing in fits and starts all year — may be in danger of stalling.

Many forecasters say economic growth in the current October-December quarter could slow to just a 1 percent pace, down from a 3.1 percent growth rate in the third quarter.

While the Fed's half-point move was double what many analysts had been expecting, the central bank did send a strong signal that further rate cuts may not be needed.

In the portion of the Fed's statement that deals with future actions, the Fed said that it now believes that risks to the economy in coming months are equally balanced between inflation and slower growth.

In August, the Fed had changed its policy stance to one indicating that the greatest risk to the economy was economic weakness.

Among the string of weak economic reports, the government reported Friday that the jobless rate climbed to 5.7 percent in October and the number of people looking for work but unable to find it rose by 100,000 to 8.2 million. And, another report on the same day showed manufacturing — the weakest link in the economic recovery — contracting in October for the second straight month.

A key factor in projections for a weak fourth quarter is the belief that consumers who have been carrying the economy all year are slowing their spending.

Consumers, whose spending accounts for two-thirds of all economic activity in the United States, have turned more cautious amid the turbulent stock market, sinking confidence in the economy and a sluggish job market.

Even as retail sales slowed, low mortgage rates have made for brisk sales of homes, which are on track to set new records this year.

Meanwhile, businesses, whose profits took a hit during the recession and have yet to fully recover, have been reluctant to make big commitments to hiring and capital investment, forces restraining the recovery.