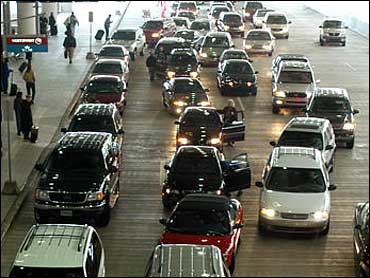 Thanksgiving holiday travelers took to the skies Wednesday in the biggest test of airport security since the federal government took it over last week, while drivers in the Northeast faced heavy, wet snow.

As CBS News Correspondent Lee Cowan reports, the busiest travel day of the year was even busier this year. An estimated 36 million people will be somewhere other than home this Thanksgiving and more than 5 million will get to their destinations by air - 6 percent more than last year. The other 30 million will travel by car.

Taken together, it's the roughly equivalent of the entire state of California hitting the road at the same time.

Which is why so many were so surprised today's travel went so well -- even in the face of an ill-timed snowstorm. At New York's LaGuardia airport, delays were only popping up a handful at a time, and across parts of New England -- socked with as much as 6 inches of fresh snow -- the storm offered more fun than fury.

"It's not a big snowstorm," said Charles Foley, a National Weather Service meteorologist in Taunton, Mass. "The thing that gives it prominence is that it's the first measurable snow of the season and the timing the day before Thanksgiving."

Around the country, only a handful of flights were delayed. Travelers were waiting an average of less than 10 minutes at major airports' checkpoints, said Robert Johnson, spokesman for the Transportation Security Administration.

"In Miami, the lines are longer at the Lotto ticket counter," he said.

According to Cowan, if there was any unexpected snag, it came quietly at the nation's gas pumps, where fuel prices are up a quarter all across the country.

At least one highway fatality in Massachusetts was blamed on the weather. In Connecticut, schools were closed and more than 14,000 customers lost electricity. The power was expected to be restored by evening.

Chris Potter, 29, a marketing agent in Oklahoma, said he had no trouble flying to Buffalo, N.Y., through St. Louis and Chicago.

"It was fast. I even have a dog and some extra luggage, and I ran right through," he said, lifting his Jack Russell terrier into his father's car at the Buffalo airport.

While terminals were crowded Wednesday, airlines expected Saturday and Sunday to be even busier.

Just last week, the government finished placing more than 47,000 security workers at 424 airports nationwide. The TSA was created after the attacks prompted concern about inefficient and inattentive private security workers.

At the Dallas-Fort Worth airport, where checkpoint waits were under five minutes, volunteers handed out popcorn and coloring books while singers crooned to a karaoke machine. Airport spokesman Ken Capps said more passengers knew what items were prohibited, which helped ease congestion.

"Last year we asked people to pack their patience and they did," he said. "This year they are packing their common sense, and the lines are moving more quickly."

Cathy Ude, who was flying from Los Angeles to join relatives in Seattle, said her biggest concern was getting her home-baked cinnamon buns past security.

AAA predicted that 35.9 million Americans will travel at least 50 miles from home by Sunday, a 1.7 percent increase from last year.

Overall, the group said, 86 percent of holiday travelers will go by motor vehicle, down slightly from 87 percent a year ago. They will spend about $1.45 for a gallon of gas, 25 cents more than last Thanksgiving.

Some people skipped both plane and car in favor of a train. Among them was Vicky Sarris, who was taking a short ride to Ridgewood, N.J., to meet family.

"We're tired of traffic on the (Garden State) Parkway and all the idiots who don't know how to drive," she said.