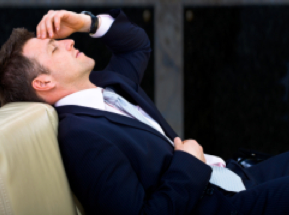 (MoneyWatch) COMMENTARY Nobody has sympathy for the devil, and nobody's demonized more these days than corporate America's CEOs. So if I told you they have days that are so demoralizing and depressing that you couldn't imagine, you'd probably come back with something like "Waaah, cry me a river," "That's why they make the big bucks" or "You want to hear about bad days? I'll tell you about bad days ...," and so on.

Well, here's the thing. There are CEOs and there are CEOs. The chief executives with crazy compensation and exit packages you read about number in the hundreds. There are actually about 9,000 public companies in America and countless private companies, big and small. Their head honchos don't make anywhere near the kind of dough you read about, and their vice presidents make a lot less.

Not only that, but if you consider all those executives and business leaders as a group, they shoulder the burden for America's $15 trillion gross domestic product. That's a lot of responsibility. So if you think executive life is all mega stock grants and luxury private jets, or you've got your eyes set on getting to the top rung of the corporate ladder, here's a dose of reality to put all that in perspective for you: The 10 worst days in an executive's life.

Getting fired. Steve Jobssaid that, in retrospect, getting fired from Apple was the best thing that could have ever happened to him, but it was devastating at the time. I've been fired, and more than once. The only worse pain is losing a loved one.

A competitive threat from an 800-pound gorilla. Last week, Internet radio pioneer Pandora Media learned that Apple is considering a competitive product. That had to be a rough day. Ages ago, I was an executive with a public software company that got more or less squashed by Microsoft. I'll never forget the day we learned they were coming after us.

Your biggest customer is going to a competitor. Big customers are a mixed blessing. Landing one is always a cause for celebration. But since it's usually a big chunk of your business, losing one can be devastating. And it's a double whammy because your loss is your competitor's gain. It happens all the time.

Screwing up on a live news program. I've seen a few executives mess up big-time on live network or cable news programs. It's never happened to me personally, but judging by how terrified I was of the possibility, I can only imagine the horror.

There's a bug or major problem with your product. I went through this once with a publicly traded microprocessor company in the 90s. There's nothing like it, especially not knowing how many returns you'll get, how many customers you'll lose and the financial impact of both.

A program -- your baby -- is being cut. There's never enough budget to go around and companies have to draw the line somewhere. If it's your brainchild you spent years developing that gets the axe, it cuts pretty deep.

Filing for bankruptcy. When the technology bubble burst, hundreds, maybe thousands of startup companies filed for bankruptcy. I was running one of them. We all lost our jobs, more than 40 people, right around Thanksgiving. That's not an experience I would ever want to repeat.

Your product won't meet key market requirements. When your company's very existence rests on a new product meeting certain competitive requirements, sometimes the development guys just don't deliver. I've been involved with that sort of thing up close and personal, and more than once.

Your top two guys resign on the same day. That's exactly what happened to a CEO I know. He sounded like all the wind had been knocked out of him that day. I know because I was one of the two executives who resigned. He ultimately replaced us and, years later, the company went public. Serves me right.

Your division will be hit hardest in an upcoming layoff. I've been involved in way too many layoffs in my career, and I've seen what executives who have to terminate hundreds of people go through. Yes, I know they get to keep their jobs, but still they're ultimately responsible for all those people's livelihoods, so it is gut-wrenching.

Don't get me wrong, I don't expect anyone to cry for leaders who signed up for the responsibility and, even if they're not Fortune 500 CEOs, probably earn a pretty good living. But the most inspiring stories we hear from leaders are the ones where they somehow find the strength within themselves to survive crises and come roaring back stronger than ever before.

Let's face it; we all love a good comeback story.