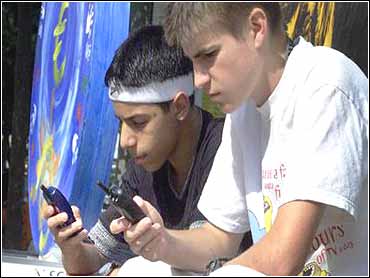 You, I gather, say Tomayto. We, of course, much prefer to pronounce it Tomarto. And what it looks like as a TEXT MESSAGE your side of the pond, I haven't the foggiest idea. Or I.H.T.F.I, as we experienced British text messagers say.

Texting, and the cellular phone itself, is one of those darned American imports like Kentucky Fried Chicken or the Golden Arches.. But this time I reckon we're winning. We're taming the text. Making it respectable. Turning it into literature. Very soon one of the world's biggest publishers, Harper-Collins, will be churning out a heavyweight new edition - the official English Texting Dictionary. A complete how to do it, how to say it and what to say in the abbreviated lingo of cellular keyboard speak. "I have truly found paradise" - or I.H.T.F.P. as I frequently tap out to many a cell-phone friend, before closing with the traditional farewell: T.T.F.N. - which means "ta ta for now" for any of you not yet acquainted with a way of talking that doesn't involve the indignity of actually opening your mouth.

In a couple of days it'll be the feast of St Valentine, patron saint of Love - which is P.S.O.L, if you're with me. Millions of meaningful short-form digits will be zooming through the ether. Say it with flowers? Shucks no! Say it with fingers, folks - I.M.H.O. "in my humble opinion". It may take a bit of learning. So thank us Brits for compiling the new dictionary. It certainly wont be a W.O.M.B.A.T. "waste of money brains and time". And anyone who hasn't read it can be considered: N.Q.O.C.D. "Not quite our class, dear". So eat your heart out Will Shakespeare. W.S. to you. This is EB4CBSNIL.....message sent.