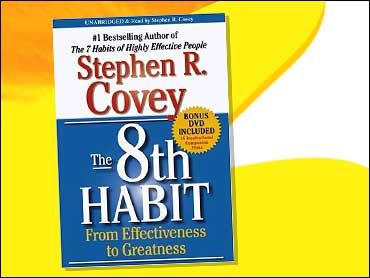 He has certainly found his; his book "The Seven Habits Of Highly Effective People" has sold more than 15 million copies and been translated into 37 languages.

Now, he has written a highly anticipated sequel, called "The 8th Habit."

Covey tells The Early Show co-anchor Julie Chen his new book adds another dimension to the original. "If you had one eye closed, that is the seven habits. As soon as you have the other, you have the third dimension, because it focuses very personally on every person finding their voice and inspiring others to find their voice."

Finding your voice, he says, means finding what you love doing, that you feel passionate about, that serves a real need, and that your conscience tells you to do.

To find your voice, Covey recommends asking, "'What is it I love doing? What is it I'm good at doing? What is needful to be done and what does my conscience say I should do?'" The answers to these questions, he says, are the first stirrings of your voice.

Covey is 72 years old. He has been married for 48 years and has nine grown children. He is a Mormon and lives in Utah.

"The Seven Habits Of Highly Effective People" encouraged people to take a mindful approach to life - not letting trivial urgencies of day-to-day life get in the way of the most important things.

The seven habits are: