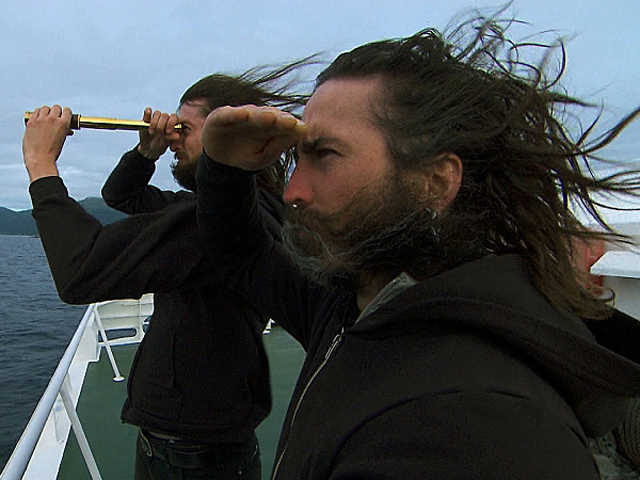 It's a good thing teams had hats and gloves in those backpacks, because it got a lot colder this week on "The Amazing Race."

During Sunday's episode, teams traveled to Norway, where the Arctic weather and midnight sun proved just as challenging as the challenges themselves.

All of the teams were on the same flight to Bodo, where, as Ally puts it, "the sun never sunsets." They then hop a three-hour ferry ride to Svolvaer, during which beaded childhood buddies Brandon and Adam plan to fish off the side of the boat and talk about their facial hair. "They're great, they're easy, they're low maintenance -- and who doesn't want a mustache?" Adam asked.

Back on land, it was fish-themed Detour time -- Hang Your Heads (string six bundles of 10 cod heads each, then bring them via wheelbarrow to outside drying racks) or Hammer of the Cods (collecting 15 pairs of dried cod off of a towering rack and then make one kilo of fish jerky). Getting to the challenge was harder than usual, because it was 11 p.m. (though still bright outside) and teams had to decide whether to walk/run there or hope for a taxi.

Everyone chooses the first task except for pals Tim and Danny and baseball wives Nicky and Kim. That challenge is much more time consuming and puts these two teams towards the back of the pack.

Meanwhile, everyone else is wheelbarrowing their fish heads to where they have to hang them out to dry, and exes Tim and Marie don't realize they have to be hung on a "Race"-marked pole. She offers the Express Pass to Brandon and Adam if they point out what they're doing wrong, but the guys (rightly) don't trust her and just keep going. Dating duo Jason and Amy also pass them by without helping before they figure it out.

Next, a Roadblock -- "Who's the biggest swinger?" For this one, a member of each team put on a wetsuit and had to jump off a bridge, swinging from an 80-foot rope, before dropping into the Arctic Ocean and swimming to a buoy containing their next clue. Jason had trouble reaching the ball that released him from the rope, but otherwise it was smooth sailing (or jumping and swimming) for all the competitors.

"You look like a bank robber!" Kim yells to her wetsuit-clad teammate. By now, these two have fallen behind to last place.

Teams then had to pick a Ford Ranger and hook it up to move a giant boulder far enough to find the clue to their next location (Viking Longhouse) and a satchel of Viking coins hidden underneath. Everyone talks about how great the truck is, save for Ally and Ashley, who don't know how to drive stick. (Side note: SERIOUSLY? It seems like every season there's a challenge involving driving stick, and there's always one team that doesn't bother to learn.) Lucky for them, the Oklahoma guys are nice enough to help maneuver their truck so they don't reverse it into a ditch.

On their way to the Pit Stop, married ER docs Nicole and Travis encounter Tim and Marie, who picked up the Viking coins but somehow missed the clue and didn't know where to go. Nicole offers to tell them where to go if they hand over the extra Express Pass. Marie, knowing they're not in last place, doesn't want to play. "Okay, we're leaving," Nicole huffs, and they drive off leaving the exes with no idea of where their next destination is.

Brandon and Adam arrive first, winning $5,000 each, and...another clue! Phil Keoghan tells them they're still racing, and we get a "To Be Continued."

Tell us: Should Marie have given Nicole the Express Pass?