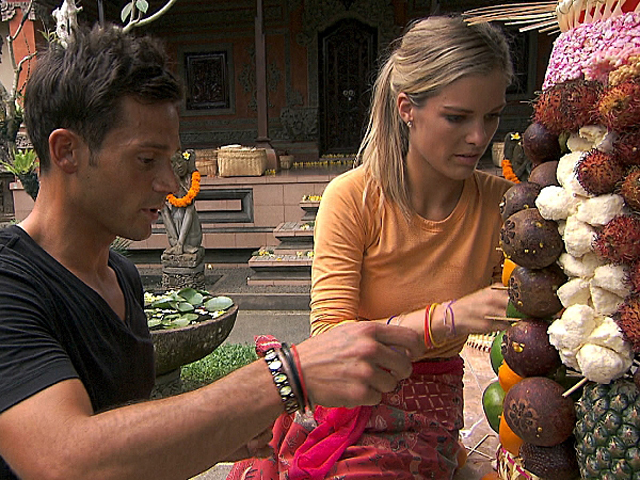 Monkeys, coconuts and surfboards played big parts on Sunday's leg of "The Amazing Race," which ended with one of the most annoying teams of the season being sent home.

When teams checked in at the Pit Stop in New Zealand, they were informed by host Phil Keoghan that they had to keep racing. Their next destination? Bali.

Teams arrived on three different flights with different connections. That's when the monkey business happened -- the animals opened coconuts that contained a rolled-up clue, which turned out to be a Detour.

The choices for this week's detour were Fruity Top or Sandy Bottom. The first option required to create a detailed fruit tower to be presented as a religious offering at a temple, while the other required them to collect sand from the bottom of a river and carry it 200 yards uphill.

Everyone except for the roller derby moms decided to go for the fruit, and set about constructing the complicated tower of fruit. Team JJ (Jessica and John) initially go to the wrong location and end up helping a random man put together flowers, but eventually realize their mistake.

Teams then had to go to a nearby beach for a Rockblock. One member of each team had to look through a stack of surfboards and find one that had an image of something they'd seen earlier in the race (the priest that blessed the teams in Bora Bora) and present it to Phil at the next Pit Stop. If teams showed up with the wrong board, they had to go back and look again.

Winnie finds the board first and tries to hide if from Connor (who is still racing with his dad, despite his injury), but he sneaks a peek as she figures out where to go next. He ends up beating her to the Pit Stop, and he and Dave win $5,000 each for arriving first. It looks like these guys will stay in the race until they reach something the injured Dave can't take on -- but how long until that happens?

The YouTube hosts grab the wrong board, and one of the country girls ends up in tears after striking out twice. Meanwhile, Team JJ switched Detours because they were having trouble putting together the fruit offering. Jessica kept wondering if they should use their Express Pass, but John kept insisting they could finish.

And they did finish -- but in last place. After John takes an hour and 15 minutes to find the correct surfboard, Phil tells them they are the last team to arrive and have been eliminated from the race.

"I think you might be the first team in 'Amazing Race' history who has been eliminated with an Express Pass on the mat," he told them.

John, unbelievably, seemed unfazed by their ousting. "I don't see the value in looking back and having regret over decisions we have no control over," he told Phil. Jessica, on the other hand, looked heartbroken.

Phil's final thought on the matter? The "Amazing Race" host looked right at the camera and said: "Oy vey."

Were you happy to see John and Jessica go? Which team do you think will win "The Amazing Race"? Share your thoughts in the comments and come back next week for another recap.