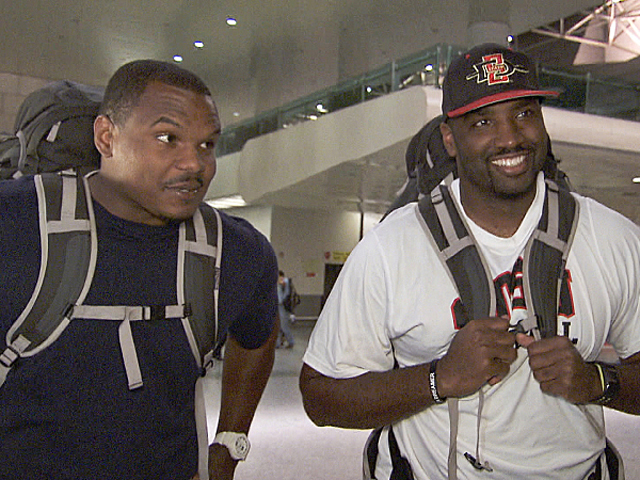 Having Phil Keoghan meet you in the airport is never, ever a good sign.

But that's what happened to former NFL teammates Chester and Ephraim on this leg of "The Amazing Race." By the time they finally arrived in Lisbon, Portugal, all the other teams had finished. And, sadly, this was not a non-elimination leg.

At the start of Sunday's episode, the footballers were in first place as teams were told they had to fly from Santiago, Chile, to Lisbon.

A string of bad luck for the pair began here -- their flight plan was supposed to put them in Lisbon at 7 a.m. after a connection in Brazil, but the travel agent mistakenly entered the wrong date. Before the mistake was realized, married ER doctors Travis and Nicole got their spot.

The NFL guys got on another flight that arrived later, but the agent felt bad and called them back, offering a different itinerary with two connections that would still get them in at 7 a.m. They decided to take the risk. Bad idea.

Oklahoma buddies Danny and Tim wisely turned down an offer from the "Afghanimals" to get on the same flight with them and the ice girls, who only wanted them along so they wouldn't have to compete directly against their "race wives." Danny was so irked that he vowed that if given the chance, he'd U-turn Leo and Jamal.

But the award for best airport strategy went to baseball wives Nicky and Kim, who managed to sneak away from the group during a layover in Sao Paulo's airport and get the first spot on the standby list for Travis and Nicole's earlier connecting flight. This meant their tentative alliance with exes Tim and Marie, who still hold the extra Express Pass, is done. "The bunnies are dead to me," she declared.

Once in Lisbon, teams were directed to a Martim Moniz Square, where a woman singing with a band handed them a canvas print of an old-fashioned coach, which they had to figure out meant their next stop was the National Coach Museum.

There, they encountered a Detour: Tiles (putting together a puzzle of fragile tile pieces) or Miles (calculating the distance traveled by Magellan using a giant measurement instrument and map of the world).

Nicole and Travis team up with dating teammates Jason and Amy for the Miles challenge, and make easy work of it (remembering that the world is round helped). Later, Leo and Jamal over-complicated the task while the ice girls did nothing to help and an intimidating actor playing Magellan stared them down. He ripped up their incorrect work and they all switch over to Tiles, where they try and goad Tim and Marie into using their Express Pass, to no avail.

Their Roadblock was a medieval one -- putting on a knight's outfit and using a ballista to shoot an arrow at shields 150 feet away. From there, they all raced to the Pit Stop at Castelo dos Mouros.

Nicole and Travis finish first, winning a trip to Costa Rica, followed by Jason and Amy, Nicky and Kim, Tim and Danny, Brandon and Adam, Jeo and Jamal, Amy and Ashley and Tim and Marie.

While all this was happening, Chester and Ephraim were battling bad travel luck, airport delays and missed connections. Had they stayed on their later flight they could have possibly still been in the game, but as it was they took their chances and it backfired. Keoghan informed them of their elimination as soon as they arrived, pointing out (helpfully?) that since they were at an airport, getting home shouldn't be too hard.

Tell us: Are you sad to see the NFLers go?