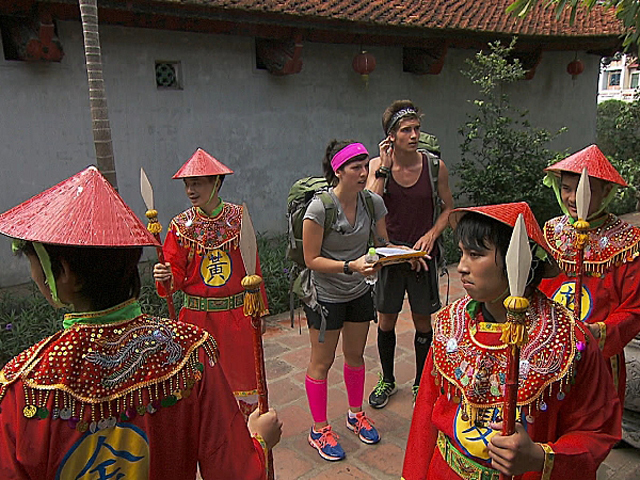 Following Jessica and John's utterly stupid elimination last week (sent home while still in possession of an Express Pass!), the remaining teams traveled on to Hanoi, Vietnam, on "The Amazing Race."

But while a Double U-Turn still lurked ahead, we learned early on that Dave and Connor would be bowing out of the race, as Dave's doctor said his injury required surgery within seven days. They flew to Hanoi, but went straight to host Phil Keoghan at the Pit Stop and said a tearful goodbye.

"He's amazing. He's my best friend. He's my hero. I would rather run four legs with you than win a million dollars with anyone else," Connor told his dad.

The father-son team had to go eventually -- if they had continued, there would, at some point, have been a challenge that Dave simply couldn't do on crutches -- but it's hard to believe they were able to stay in the race for even this long.

Meanwhile, the other teams were told to head to Gallery 42, where they're given a Roadblock. One member of each team had to watch a performance of a patriotic anthem, which included dancers holding up a phrase written on umbrellas. They then had five minutes to find that exact phrase in a room filled with Communist propaganda posters. Those who didn't find it in time had to watch the performance before they could search again.

Pam is the first to find the correct phrase on a poster, and she and Winnie head on to their next task: doing a traditional bamboo dance. They notice right away that the dancers are holding hands and follow suit -- teams who didn't hold hands, like Chuck and Wynona, had to do the dance again (and again, and again).

This week's Detour then asked teams to "Make a Move" (playing Chinese chess on a giant board with human players) or "Make a Meal" (grab two empty baskets and another two filled with live chickens, then head to a market and get ingredients for the traditional Vietnamese dish pho, picking up exact weights for the ingredients on the shopping list).

Chuck and Wynona got lost trying to find the market (and forgot the chickens, to boot), while Max and Katie lucked out by finding an English-speaking woman who helped translate at the market.

The next destination was the B-52 Memorial, which was the site of the Double U-Turn. Staying true to their alliance, they U-Turn the YouTube hosts. When those two arrived, they U-Turned Chuck and Wynona, putting them even further behind.

After doing both sides of the Detour, the married Alabamans discover they are the last to arrive. However, they're informed that because Dave and Connor DQ'd themselves, they will not be eliminated and can continue racing.

Are you sad to see Dave and Connor go? Who do you think will win "The Amazing Race"? Vote in our poll and come back here next week for another recap.