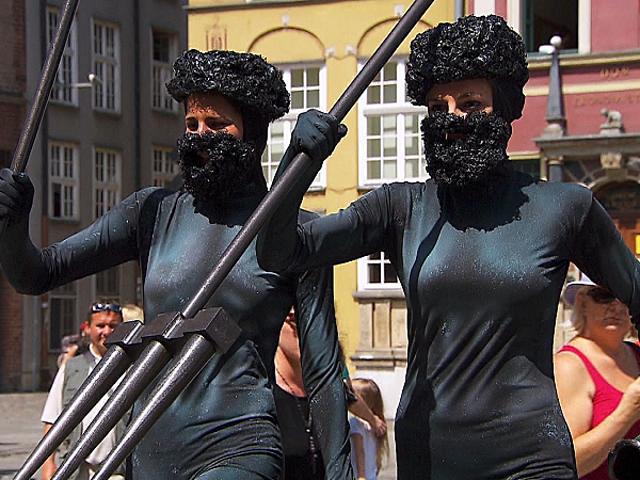 Bearded buddies Brandon and Adam started Sunday's leg of "The Amazing Race" in first place. But, after a long ferry ride, trouble with challenges and the dreaded Double U-Turn, the good-natured guys fell to the bottom and out of the race.

They were the team I was rooting for -- they seemed to really be enjoying running the race together and were nowhere near as annoying as some of the other competitors ("Afghanimals" and Marie of Tim & Marie, I'm looking at you). Now, I'm not sure who I'd like to see win.

Let's begin back in Norway, where the interaction between Nicole and Travis and Tim and Marie played out very differently than it left off last week. It had looked like the exes wouldn't give up their second Express Pass, but now we're seeing Marie hand it over to the ER doctors in exchange for the location of the Pit Stop, apparently at Tim's behest. "This is the first time I've ever let you make a decision," Marie told him.

When everyone arrived at the Pit Stop, Phil Keoghan handed them another clue and said they were still racing (this at something like 4 in the morning, with the round-the-clock sun still up). It was on to Poland, via a 34-hour ferry ride to Trondheim, Norway, and then on to the Polish city of Gdansk. All the teams ended up on the same boat, evening the playing field.

Everyone gets into taxis to head to Solidarity Square, but the Afghanimals, Ally and Ashley and Tim and Marie all get lost trying to find it and fall to the back of the pack. Meanwhile, Jason and Amy's cab driver gets in on the competition, refusing to share information about teams' next destination - the Golden Gate - with Brandon and Adam's driver.

At the Golden Gate, teams encountered a Detour: Pose (dress up as and pose like a stature of Neptune until the collect 75 zloty from passersby) or Polka (learn and perform a choreographed polka routine -- in costume, of course). Most teams chose to dance, much to the displeasure of Team Oklahoma's Danny, who complained about having to wear the woman's costume. And, because "The Amazing Race" loves costumes, teams had to keep their new outfits on for the rest of the leg.

Baseball wives Nicky and Kim breezed through the posing challenge, gamely chatting with people and begging them to donate. Brandon and Adam just stood there for a bit (and didn't really engage with the crowd, therefore not collecting very much money) before deciding to switch tasks. Tim and Marie decided not to polka or pose and cashed in their Express Pass, instantly putting them in first place.

Surprisingly, the exes decided not to U-Turn anyone when given the opportunity. The Oklahoma boys get there and decide to U-Turn Leo and Jamal. They, in turn, U-Turn Brandon and Adam, forcing them both to head back to the square and pose for money (which, if Brandon and Adam had stuck with in the first place, they probably wouldn't have lost this week).

The Afghanimals ham it up and make quick work of the Neptune challenge, while Brandon and Adam again have trouble warming up the crowd. They know it doesn't look good for them.

Next, teams had to do a Roadblock at the longest apartment complex in Poland, visiting various apartments in the mile-and-a-half-long building in search of one serving rose paczki, a filled jelly doughnut-type pastry. Marie and Amy team up and eventually add Travis, taking a bite of the desserts in each apartment they visited before quickly leaving when it wasn't the flavor they were looking for.

Those three finish first and race with their partners to find Phil on the Sopot Pier. Tim and Marie land on the mat first, winning a trip to Hawaii. Jason and Amy take second and Nicole and Travis (who have that Express Pass, but none of the other teams know yet) get third, followed by Nicky and Kim, Tim and Danny, Leo and Jamal and Ally and Ashley. Brandon and Adam arrive eighth, and are eliminated from the race.

Tell us: Who do you want to win "The Amazing Race"?