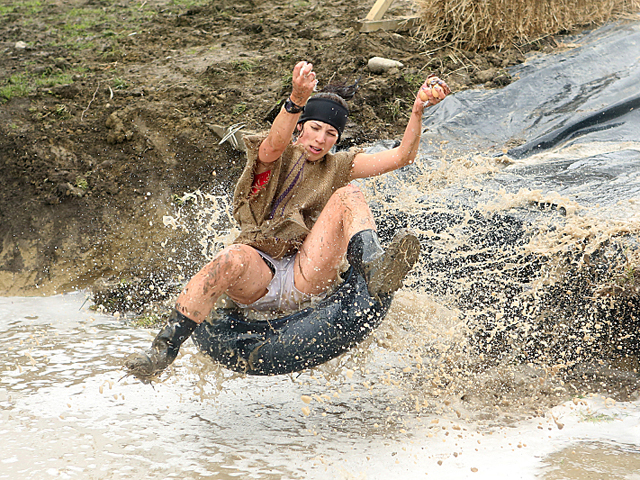 Injury did not stop father-and-son cancer survivors Dave and Connor from taking first place on Sunday's leg of "The Amazing Race," but will they be able to continue competing?

The leg began in Bora Bora, where Dave suspected he had ruptured his Achilles tendon during the team's race to the pit stop. From there, teams had to fly on to New Zealand, via Tahiti. The long layover meant Dave had time to see a doctor, who confirmed he had torn both his Achilles tendon and the surrounding muscle. He was fitted with a boot and put on crutches, but decided to continue the race. "We'll keep going until we can't," he told the other teams when they returned to the airport.

Before flying on to New Zealand, Jessica and Josh gave the second Express Pass to the injured Dave and Connor. They either did it to honor their original "alliance" agreement, or because they figured the guys wouldn't be able to compete and that Express Pass would soon be gone from the game.

Teams arrived in New Zealand on different flights, but all had to camp out until morning before taking on the next challenge. There were two choices for the Detour: Rev It Up (both team members must drive a vintage car around an obstacle course in under 83 seconds combined) or Reel It In (going fishing, where both must catch a fish larger than 12 inches).

Everyone chose to Rev It Up except for Team Alabama, since Chuck had experience fishing. But Dave and Connor immediately realized they couldn't do the racing challenge because Dave couldn't operate the clutch with his boot. After attempting to fish for five minutes, they handed in their Express Pass and moved on.

From there, a Road Block required one member of each team to participate in a Shemozzle Race, an obstacle course that involved being covered in molasses, feathers and riding an inner tube into murky water, all while collecting eggs.

This week's Pit Stop was at Terrace Downs, and Dave and Connor arrived first. But, they're not done yet -- host Phil Keoghan informed the men they were still racing and presented the next clue.

The episode ended with Dave wondering if he could continue racing, or if they should just stop there. We'll find out what he decides next week.

Tell us: Should Dave and Connor continue racing?