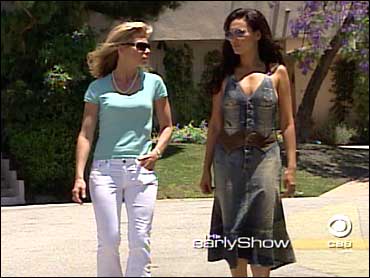 Not so long ago, pregnant women used to hide their bellies under maternity clothes for months and then battle for years to lose the weight they gained during the pregnancy.

In the final part of The Early Show's series, "Not Your Mother's Mother," national correspondent Tracy Smith finds celebrity mothers who seem to shrink back to size the moment their baby is born are placing more pressure than ever to drop that baby weight. Ironically, at the same time, the beauty of the pregnant female form is being celebrated and in 2006, the big belly is bigger than ever.

Photographer Heather Hart hit the beach specializing in taking photos of pregnant women. At a recent fashion shoot, the model is just a scant few weeks from delivery. Most portrait photographers concentrate on facial features, but for Hart, it's all about the belly.

There's a huge demand for pregnancy photography," she said. "I think that now people are realizing the pictures are so beautiful that they want them also."

Hart said she does about 25 shoots a month similar to the one mentioned above. She said the number is growing and that husbands often want to get into the act. Many customers come back for more.

"I think people want their wedding photography and then their pregnancy photography," Hart said. "They want this for their walls."

But society is sending a mixed message about pregnancy: You can celebrate the beauty of your pregnancy … but once that baby's born you better drop the weight – quickly.

Tia Carrere has stared in the hit comedy "Wayne's World" and recently joined the cast of ABC's "Dancing with the Stars" just seven weeks after giving birth to daughter Bianca.

"I just happened to get the phone call," Carrere said. "I got the phone call from the TV show that said, 'Hey, you wanna come and dance?' and I thought 'Wow. Dancing, that sounds fun.' I had no idea what I was in for."

Carrere danced well, but weighed a bit more than she ever had on camera. She said it wasn't easy.

"The biggest challenge in losing the weight after having Bianca is you want to lose it fast," she said. "I consciously fought the urge to just lose the weight at all costs. I mean I was on television in front of 24 million people. Girls in Rockette body shape, in these amazing costumes."

Since she was still nursing Bianca, a crash diet was out of the question. So Carrere called Jackie Keller, author of "Body after Baby," a roadmap to losing baby fat after the birth.

"Societal values have shifted," Keller said. "I mean generally speaking we are expected to be thinner then we were 10 years ago, baby or not. And I think our expectation is reflected in that."

Carrere says she's now actually lighter than she was before the pregnancy and that if she becomes pregnant again, she will be sure to exercise during the pregnancy.

"You can lose the weight. You can be healthy. You can take care of your baby. And do it all the right way," she said. "Nothing sexier then being a mom."