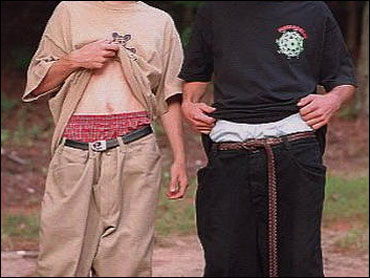 According to Wikipedia, "'Fashion police' refers to ... an imaginary police force that makes sure that people dress according to fashion." Now Atlanta City councilman C.T. Martin no longer wants the fashion police to be just "imaginary." He has proposed fining men and boys who wear baggy pants that show their underwear and women and girls who show the strap of their thong or wear sports bras in public. One of the comments on the Atlanta Journal-Constitution Web site said it's "like banning stupidity." I disagree. Banning stupidity might make more sense.

Should city governments really get into the area of legislating fashion? Those baggy jeans that drag on the ground and reveal boxer shorts look ridiculous to me. And I think wearing a sports bra in a restaurant is an odd choice. I'm sure I'm not alone in these opinions. But just because we don't like the way some people dress doesn't mean we should outlaw their clothing choices. I'm sure there are plenty of people who don't think I dress well - some of them live in my house - but I'd hate to have to worry about being arrested every time I throw on my old sweatshirt.

In all fairness to Councilman Martin, he isn't just concerned with fashion. He feels that the clothing he'd like to ban is representative of what he thinks are bad aspects of the hip-hop culture, which has its roots in African-American communities. Martin, an African-American, believes that young children see their hip-hop heroes wearing clothing like this, emulate it, and then believe that "half-dressing is the way to go." He added that baggy pants are becoming "an epidemic" throughout the country. If that's true, I don't think the vaccine for that epidemic will be a "baggy pants ban."

Much like language, fashion evolves. America didn't need legislation to get rid of the Nehru suit or mini-skirts made of paper. When the Beatles came on the scene, many parents were shocked by their "long hair" - which would be considered fairly short today. Women's hemlines have gone up and down as often as the stock market (and some people have even suggested a correlation). When I was in school, the kids who wore baggy pants weren't "in." The cool kids - the kids that adults disapproved of - wore tight pants. So, it was the opposite of today. And no law caused that swinging of the fashion pendulum.

Councilman Martin is probably right that people's fashion choices are influenced by those whom they admire. Until the 1960s, most American men wore hats. Many people feel that the majority of men stopped wearing hats because John Kennedy didn't wear a hat to his inauguration. When Michael Jordan stopped wearing shorts that were, well, short, other basketball players followed his lead. Soon, kids were wearing shorts that might more correctly be called "longs." But these changes did not come about because of some "uncovered head proclamations" or "below-the-knee shorts" laws.

If schools or restaurants want to ban certain clothing, that's fine. In fact, I'm all for that. But banning particular clothing in public seems over the line. And please don't write me to say that if smoking can be banned from public places, why can't certain ways of dress be banned, too? As far as I know, there have been no cases of getting cancer from "second-hand baggy pants."

I have no idea if there is any connection between dressing like a "gangsta" and getting in trouble, as the councilman apparently feels or fears. However, if parents don't want their kids to dress like this, they can just say, "no." If a kid shows up to school dressed inappropriately, let's not blame hip-hop stars. Let's blame the adults that let them walk out of the house that way.

Speaking of adults, to those like Councilman Martin who feel that kids dressing this way is, indeed, a serious problem, I have a suggestion: All the concerned adults have to do is to start dressing this way themselves. Once kids see older people wearing these clothes, they'll stop wearing them. Dressing like this will no longer be hip - just like the word "hip" is no longer "hip" now that people like me use it.

Lloyd Garver has written for many television shows, ranging from "Sesame Street" to "Family Ties" to "Frasier." He has also read many books, including "Dress For Success."