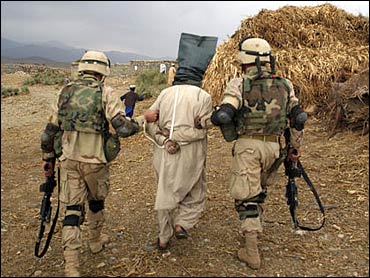 (AP)
The good news for detainees at Bagram Air Force Base is that the Obama Administration is set to implement new policies that will give them more due process rights. The bad news for the terror-law suspects in Afghanistan is that these new rules only raise their legal status to the lowly (and still largely undefined) one held by detainees currently held by American forces at Guantanamo Bay, Cuba. Be grateful for small favors, right?

Right -- especially after a particularly harsh summer of discontent at Bagram, where the once "secret" prison has become for some the latest symbol of overzealous American prosecution of the war on terrorism. There have been hunger strikes there, and allegations of abuse and other chaos, and most of all lawsuits brought by the detainees seeking to have some sort of independent and fair review of the government's rationale and evidence justifying their confinement.

The White House's reluctant (and, some say, belated) decision to overturn Bush-era policies toward the Bagram detainees, to give them equal rights with the Gitmo detainees, would make more sense if the military commission rules at Gitmo were stable, well-defined, and legally-recognized by the federal courts. They are neither of the three.

Gitmo detainees themselves continue to reside in a legal netherworld; so much so that one of the "worst of the worst" there, 9/11 conspirator Ramzi Binalshibh, got his lawyers to file a motion last week reminding the federal judiciary that the Gitmo pre-trial process is a mess.

Here's how the Washington Post reports some of the details of the Binalshibh case:

"Two military psychiatrists found that Binalshibh has a 'delusional disorder,' and he has been given psychotropic medicines at the military prison, according to court papers. Those psychiatrists were appointed by the court; Binalshibh's attorneys said they would like their own experts to examine him.

In July, when one of the lawyers began to discuss the need for a sleep-deprivation expert to help assess his client's mental condition, the judge cut off discussion after consulting with a court security officer, who had consulted with unknown persons outside the courtroom. The judge then instructed counsel to discuss only what happened to Binalshibh after he left CIA custody." 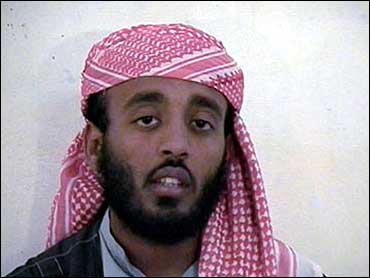 (AP)
Binalshibh's motion, styled an "emergency writ," seeks a federal court ruling declaring the current military tribunal rules to be held unconstitutional. "Nothing about this case bears any resemblance to the orderly and regular criminal process that occurs in federal and state courts," his lawyers wrote. That was the whole point of commissions, remember, when Bush Administration lawyers and military officials ginned them up eight years ago this November, in the wake of the terror attacks. They were supposed to streamline justice for the detainees, one way or the other.

They have instead been a miserable failure, as everyone knows. And now some of those same rules will be applied (or will be blocked by a court before application) to the Bagram detainees. Why the Obama Administration didn't first fix the foundation of the structure -- fair, lawful, fast-moving military commission rules that could apply to all detainees everywhere -- before adding on another floor (the Afghan prisoners) is a legitimate question lingering over this new move.

One thing that ought to linger no longer, however, is the hope and expectation that the White House and Justice Department will realistically be able to "close" the Gitmo prison by January, a self-inflicted deadline set by President Barack Obama on his first full day in office. The Pentagon's top lawyer, Jeh Johnson, mustered up the candor last week to begin to back away from any sort of guarantee that the detainees will be dispersed from Cuba (to the States for trial, to the Middle East for asylum, to third countries like Palau) in time for Super Bowl XLIV.

What's it all mean? Eight years after the Twin Towers fell we ought to expect many more years of legal confusion over the rights of the detainees, with no visible end in sight.