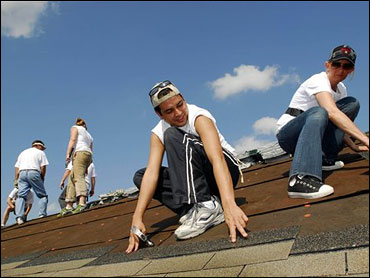 
When Hurricane Katrina swamped the levees of New Orleans last August, the resulting floodwaters swept away any pretense that the area's criminal justice system was holding its own against a less dramatic deluge of drug cases, lower budgets, and poor management.

And while the levees are being swiftly rebuilt - at a massive cost - the federal government, and state and local authorities still haven't committed to paying the relatively small price it will take to fix the courts and the legal system that runs through them.

Instead of taking advantage of the calamity to start over and build a working justice system in New Orleans, instead of using the near-blank slate that nature and poor engineering had wrought, there is still chaos caused by a lack of funding and a dearth of leadership.

Nearly nine months after the waters rose, criminal defendants cannot get court-appointed lawyers because there isn't enough money to pay them. And not enough private attorneys have volunteered their time to fill the void. Judges cannot get witnesses or jurors. And no one can get to trial because there aren't enough courtrooms.

And all the while too many suspects held on bail sit in rotting jails, waiting for the system to work again, even on its modest pre-Katrina scale, so that they can have a chance to vindicate their legal rights.

The Washington Post last month reported that "doing Katrina time" —in which indigent suspects arrested on misdemeanor charges just before Katrina hit are found languishing in jail — is a regular phenomenon around New Orleans.

The New York Times this week reported that one local judge, Arthur Hunter, is taking the dramatic step of ordering the release of prisoners, even those who face serious charges, because they have waited too long for legal help.

The Sixth Amendment guarantees criminal defendants a right to a "speedy" trial unless they specifically waive that right. It is not in the Constitution, of course, but you don't need to be a lawyer to understand that an act of nature— like a Hurricane— cannot serve as a waiver of a suspect's right to confront the evidence against him in a timely manner.

And yet the stories that continue to come out of New Orleans suggest that people were kept in jail even after they were ordered released, or have already been incarcerated before trial longer than they would have been had they been convicted. It is a disaster— worthy of a third-world, two-bit country.

In one parish, the Post reported, public defenders are being asked to handle six times their normal caseload. The Times tells the story of a prisoner named Ronald Dunn, arrested before Katrina for possessing crack cocaine. Dunn says he has yet to see an attorney in the nine months since he was placed in jail and that, under Louisiana law, he cannot even plead not guilty without that lawyer.

The problem, both the Times and the Post report, is that the trickle of public funding that once came in to help make the public defender program operate— money from parking fines and other fees— has dried up along with New Orleans' population. And so a poorly-funded defenders' program has become a virtually unfunded program.

It is easy to discount this problem or to ignore it altogether. After all, the "victims" here are people who have been accused of committing crimes. Some local prosecutors contend, to their everlasting shame, that it's just too darn bad that the hurricane forced these people to wait longer than usual to talk with their attorney and get to trial (or make a reasonable and informed plea deal).

But the lack of attention to this structural defect in New Orleans' society says as much about us as a people, and about our politicians as leaders, as it does about the men and women who suffer from the problem the most. We owe criminal defendants their constitutional rights not as a courtesy, or as a chore, or as a last resort, but as a matter of honor and conscience and duty and law.

Judge Hunter wants the Louisiana legislature to earmark more funding for the public defenders' program before he stops pushing to release prisoners. Louisiana Governor Kathleen Babineaux Blanco has asked to double the existing budget to $20 million to pay for a revamped defenders' program. But even that amount is peanuts compared to the billions the federal government already has spent on other important public works projects designed to aid the City.

Congress and state officials ought to start paying attention to this problem. The City won't come back if there is no law and order and law and order starts with a competent and workable judicial system that can process people through it fairly and swiftly.

Even before Katrina, New Orleans' legal system was nothing to be proud about. But now it has become simply unacceptable. There is plenty of blame to go around for this. But blame isn't going to get those people a lawyer, or a trial date, or their constitutional right to get to court.

Funding the system properly won't generate huge headlines or great video but it is the right thing to do— and our politicians have been far too slow in doing it.
By Andrew Cohen