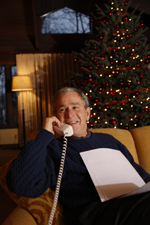 (White House Photo)
CBS News White House correspondent Mark Knoller reports that President Bush called nine members of the U.S. Armed Forces around the world to thank them from for their service. The White House released a photo of Mr. Bush making the calls, seen at left.

"He requested that each member serve as his messenger in passing along Holiday wishes from him and Mrs. Bush to all troops, as well as the special appreciation he has for our military men and women serving our country," said White House press secretary Dana Perino.

Knoller reports that back in the early days of the Clinton Administration, the White House actually allowed reporters to listen to an audio feed of the president's holiday phone calls to members of the U.S. military overseas. The practice was ended after a year or two.

Here's the menu of the Christmas Eve dinner and tomorrow's lunch at Camp David, as released by the White House:

The White House also released this background material on the nine troops the president called today:

Specialist Marcus T. Brown, U.S. Army, deployed to Baghdad, Iraq, with (FOB Falcon) Mortars, HQs and Headquarters Company, 122 Infantry, 1st Brigade Combat Team, 4th Infantry Division. On April 30, 2008, Specialist Brown's unit came under fire and he was wounded by an Explosively Formed Penetrator. Despite his wounds, he continued to fight and was awarded the Bronze Star with Valor Device. Specialist Brown is responsible for the technical attributes of his entire squad's weapon system and is an expert in all matters relating to the Infantry Mortar Platoon.

Fireman Matthew "Matt" Frounfelker, U.S. Coast Guard, deployed with USCGC Aquidneck currently in the Arabian Gulf. Fireman Frounfelker has participated in high risk boardings ensuring the safety and security of vessel traffic to and from the Al-Basra Oil Terminal and Khor al-Amaya Oil Terminal in the Northern Arabian Gulf. His shipboard duties include assistant to the damage control petty officer, boarding team member, small boat crewman, in port crewman and engineer of the watch (EOW).