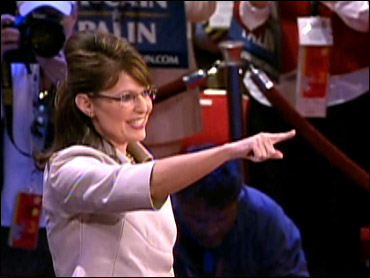 The column was written by The Editors of the New Republic.

On the vice presidency:

"I've been so focused on state government, I haven't really focused much on the war in Iraq. I heard on the news about the new deployments, and while I support our president, Condoleezza Rice, and the administration, I want to know that we have an exit plan in place."
--March 21, 2007, Alaska Business Monthly

"Pray for our military men and women who are striving to do what is right. Also, for this country, that our leaders, our national leaders, are sending [American soldiers] out on a task that is from God. That's what we have to make sure that we're praying for, that there is a plan and that that plan is God's plan."
--June 8, 2008, Wasilla Assembly of God Church

"Growing up with being so privileged and blessed to be given a lot of information on, on both sides of the subject--creationism and evolution. It's been a healthy foundation for me. But don't be afraid of information and let kids debate both sides."
--October 25, 2006, gubernatorial debate

"A changing environment will affect Alaska more than any other state, because of our location. I'm not one, though, who would attribute it to being man-made."
--August 29, 2008, Newsmax

"I think God's will has to be done in unifying people and companies to get that gas line built, so pray for that."
--June 8, 2008, Wasilla Assembly of God Church

On receiving $1.8 million in federal earmarks for the city of Wasilla:

"FYI This does not include our nearly one million Dollars from the Feds for our Airport Paving Project. We did well!!!"
--June 14, 1999, Wasilla City Council Informational Memorandum 99-62

On that "Bridge to Nowhere":

Question: "Would you continue state funding for the proposed Knik Arm and Gravina Island bridges?"
Palin: "Yes. I would like to see Alaska's infrastructure projects built sooner rather than later. The window is now--while our congressional delegation is in a strong position to assist."
--October 22, 2006, Anchorage Daily News

"What would your response be if I asked you to remove some books from the collection?"
--October 1996 conversation with librarian Mary Ellen Emmons, Anchorage Daily News

On the secessionist Alaskan Independence Party:

"Your party plays an important role in our state's politics ... keep up the good work, and God bless you."
--2008 video address to Independence Party's convention

"We want to see Ivana because we are so desperate in Alaska for any semblance of glamour and culture."
--April 3, 1996, Anchorage Daily News

"I will unambiguously, steadfastly, and doggedly guard the interests of this great state, as a mother naturally guards her own. Like a Southeast Eagle and her eaglets, or, more appropriately here in the Carlson, like a Nanook defending her cub."
--December 4, 2006, Inaugural address

On the prospect of becoming a candidate for vice president: