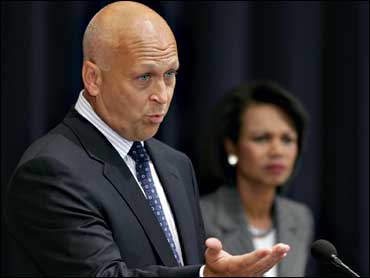 
August is a difficult month for reporters. The cable channels, evening news broadcasts, daily newspapers and magazines must report the news — but it is not always easy to figure out exactly which stories are news and which are, how should one say it, the kind of stories that only seem to become "news" in August.

It's not as if nothing of consequence happens in August. Karl Rove's departure from the White House is clearly news, as are the bridge collapse in Minnesota and the coal mine tragedy in Utah. But what about Cal Ripken Jr. being named a public diplomacy envoy by Secretary of State Condoleezza Rice?

That's right: Before Rice left town on vacation, she and the former Baltimore Orioles All-Star infielder, fresh from his induction into baseball's Hall of Fame, appeared before reporters and a handful of diplomats — obviously they were also baseball fans — in the State Department's Dean Acheson Auditorium. There, Ripken's accomplishments were duly noted by Undersecretary of State for Public Diplomacy Karen Hughes, who spoke of her efforts to reach out to younger people around the world and of looking "at ways to counter extremism and foster greater tolerance and respect for diversity." Ripken, she said, should be a wonderful emissary for young people around the world.

Rice, a real sports fan, seemed ready to trade in her own rather significant accomplishments — which were not achieved in the athletic realm. "You all know that I, myself, had I had my choice in life, would have been a truly great sports legend (laughter), but the next best thing is to stand next to one."

Ripken's first diplomatic foray will be a trip to China this fall. He doesn't speak Chinese, but said he didn't expect that would be a problem. Nor would the fact that he would be going to countries where the United States wasn't always well liked be a problem.

"I think there is a magic in sport, and you are appealing to them in a different way," Ripken said. "You're usually received with more open arms, I think. You know, this isn't a political statement for me, necessarily."

Hey, maybe this will help with America's image abroad, but there did seem to be a hint of August "news" in the air.

If there was any doubt about what month the calendar reads, just take a look at the new issue of GQ. There, if anyone was wondering, you could find a story on "The 50 Most Powerful People in D.C." And who was No. 1 one on that list? Why none other than the aforementioned secretary of state, that's who. Asked for a comment, Rice's spokesman, Sean McCormack, barely suppressing a smirk, said, "I think this shows that GQ thinks she can sell magazines."

GQ said "it wasn't an easy choice for No. 1," but Rice's close relationship with her boss, President George W. Bush, seemed to give her an edge. In a backhanded compliment, the magazine said, "Rice, the ultimate yes-woman as national security adviser, has become a much-needed check on the Office of the Vice President."

Close observers of the power-suit crowd also noted GQ's other picks, who hang up their suit jackets before rolling up their sleeves for serious diplomatic engagement. Undersecretary of State R. Nicholas Burns, a protégé of Rice's and the No. 3-ranking official in the department, came in at No. 19, while Gamal Helal, the department's top Arabic language interpreter, popped up at No. 41. Spokesman McCormack termed Helal "a connoisseur's choice." Actually, Burns, clearly comfortable in his daily diplomatic garb, is usually seen without a suit jacket only at Red Sox games. And Helal, most often in the spotlight when he's at work, standing or sitting between the president or the secretary of state and an Arabic-speaking world leader, is almost never seen without his power suit jacket properly buttoned.

Yes, we should all enjoy what "news" we can this month, because September will be here before we know it. Then, we will be watching Gen. David Petraeus and Ambassador Ryan Crocker give their report on the next steps in Iraq — and no one will have to worry about whether it's real news or August "news." That will be news — and it will be all too real.