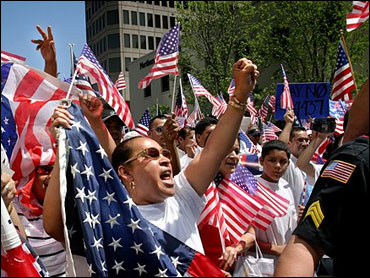 It's official! The Senate voted to make English the national language of the United States.

Do you feel a lot better knowing that? Or were you like me and thought English was our national language?

Of course new citizens should speak English but why would the Senate spend hours debating whether to make English our national language?

Let me break it to you gently: because it gives Senators something to do while they avoid addressing the real problems -- the war, health care, the ballooning deficit and immigration, for that matter.

Working on real problems that have to do with national security and the country's fiscal well-being take determination, political courage and the ability to compromise -- all of which have become the missing ingredients of modern politics.

So we'll hear more about silly issues between now and election day and come to think if it...

Maybe we should make the Washington Monument the national monument to our first president, otherwise people might think it honors the Washington Airport.

And if Senators designate Grants Tomb the official tomb of General Grant, maybe that old joke about who is buried there would go away.

And while they're at it, maybe senators could declare the U.S. Capitol to be the national monument to wasting time and avoiding responsibility.

Actually, I doubt any of us needs to be reminded of that.