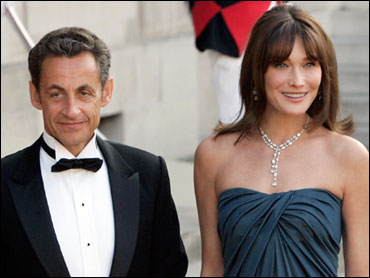 
From the day of their first public date - at Disneyland Paris of all places - their lives have always seemed torn from the pages of a fairy tale.

That was back in December 2007 when the confident new French president, Nicolas Sarkozy, courted the Italian-born model and French pop singer, Carla Bruni, as they wandered the pathways with Disney's fabled characters. Soon after, they wed and became an extraordinary media sensation.

But now it seems there might be some trouble in the magic kingdom. And if the latest rumors buzzing around the French blogosphere about them both having extramarital affairs are true, this glitzy political saga could be coming to an end.

Suchablog.com has published posts saying that Carla Bruni fell in love with the French singer Benjamin Biolay, who just won the award for best male singer and best album of the year at the prestigious "Victoires de la musique."

Bruni and Biolay have reportedly been friends for many years. And according to suchablog.com, Bruni and Biolay already live together. The same blog, which brands itself as a web magazine, also says that president Sarkozy has found "comfort in the arms" of right-wing politician Chantal Jouanno - a 40-year-old cabinet member in charge of the environment as well as a karate champion.

But the French establishment media is legendarily indifferent when it comes to covering the private affairs of their elected leaders. So there has been no questioning of the president about all this. The way the possible scandal has slowly emerged in France stands in stark contrast to how it would be covered in the tabloid culture of the American media, according to observers here.

This hyperactive, American-friendly president and this French-Italian former model and singer have always been flamboyant and always prompted all kinds of speculations and rumors, including that Sarkozy was begging his former wife Cecilia to get back together, to rumors of a Sarkozy-Bruni baby. But now the rumor mill is working overtime in France, and a lot of it is ending up online.

Other websites to run the rumor include the well-known blog Le Post, Yahoo News France and Agoravoxtv.

For now mainstream media haven't published the rumors, which bloggers said are more likely to become public after the March 21 regional elections in France.

On television, only the news channel i-tele has suggested that Sarkozy and Jouanno, and Bruni and Biolay, are close. An i-tele presenter said on the air that Bruni was the first to congratulate Biolay for his awards, and wondered whether Sarkozy had had the time to congratulate minister Jouanno on her recent karate win.

For its part, Sarkozy's public relations office had no comment on the rumors in response to a request from GlobalPost.

Most mainstream French media are likely to stay away from the rumor because the president's personal life is a touchy topic and they worry reporting on the rumors could put their jobs at risk. Also, in France, privacy law keeps tabloids off the shelves and offer public figures a greater measure of, well, privacy, than in the U.S.

"Journalists often whisper a few gossips off the record, but they do not publish them, because they don't want to jeopardize their relations with politicians," said Dominique Moisi, a French political expert at the French Institute of International Relations. "That said, sometimes it is a good thing, you don't want every gossip to get published."

According to word of mouth, Alain Genestar, the former editor-in-chief of the magazine Paris Match, was fired after he published an article and pictures that showed that Nicolas Sarkozy's ex-wife, Cecilia, was having an affair with the media guru Richard Attias.

At the time, the public was shocked, according to Nicolas Thierry, president of the journalists' union CFDT Journalistes. "Alain Genestar received a lot of sympathy from the public after this event," Thierry said. "The public felt that it was only fair that Sarkozy's personal life would be exposed, after he used the image of his wife a lot during his presidential campaign."

But according to Thierry, the French public "doesn't always support the media when they disclose personal information about famous people."

It is widely accepted in France that public figures shouldn't be judged on their sentimental lives but on their work, especially when it comes to politicians. Former presidents Francois Mitterrand and Jacques Chirac reportedly had affairs, but this didn't ruin their political images, although Mitterrand's "hidden daughter" Mazarine did make the headlines when the story came out.

As for the current rumor, reactions from the streets of Paris seemed to show more disappointment with Sarkozy's policies than keen interest in his love life.

"I couldn't care less," said Gauvin Leconte, a young professor. "What I care about is my everyday life and the president's decisions. I am not happy at all with what Sarkozy does. He made things harder for us teachers."

A man named Jean-Francois, who didn't want his last name used, was chatting with a pal on a bench in front of Paris' Saint Sulpice church and had a similar reaction.

"I am not interested in Sarkozy and in his huge ego," said Jean-Francois. "At the end of the day if he did go with another chick, it would just be an expression of what he is inside ... a jerk."

Raoni Moisan, a student in Paris, was a bit less harsh. "Frankly, I think that Sarkozy has other things to do," Moisan said. "He's probably focused on trying to keep his job and pursue his programs."

As for Bruni's alleged new choice of lover, Moisan suggested that it would definitely represent a step-down for the French-Italian diva.

"After Mick Jagger, Biolay is definitely a much smaller fish," he said.

History - and sales - will decide on the artistic merits of singer Biolay, while the coming regional elections will surely give the French a chance to express themselves on what they apparently really care about the most: the president's policy and its impact on the economy.