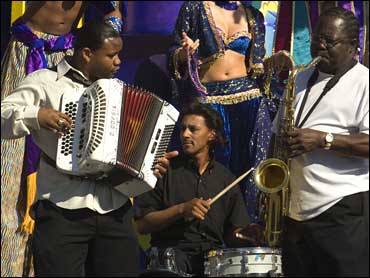 The Force will be with Jeff Gordon this weekend.

Gordon's No. 24 Chevrolet, which is sponsored in part by Pepsi, will drop its traditional rainbow paint job for characters from the recently-released "Star Wars: Episode I - The Phantom Menace."

The car was unveiled Wednesday and will be used in Saturday's Busch Grand National Carquest Auto Parts 300 at Lowe's Motor Speedway.

"Pepsi brought us the idea of creating a Star Wars car and we jumped at the opportunity," said Gordon, a three-time Winston Cup Champion. "I was only six years old when the first "Star Wars" movie came out and I loved every minute of it."

Racing and Star Wars fans can buy miniatures of the Pepsi/Star Wars car at retail stores this fall.

"Star Wars is a historical part of the American culture, and Jeff has certainly become a cultural icon among millions of race fans," said Fred Wagenhals, CEO of Action Performance, which will market the collectibles. "It's exciting to see fiction and reality come together on the track."