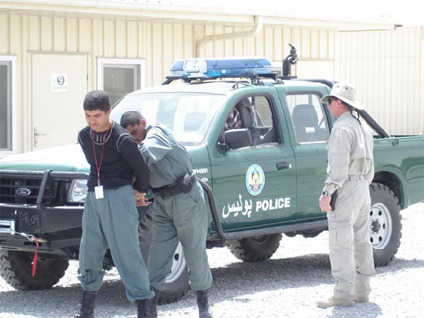 Poor marksmanship. Lack of discipline. Corruption. Drug use. And if that weren't enough to cast doubt on many of the recruits being trained for the Afghan National Police (ANP), there's also illiteracy and an unfamiliarity with toilet paper.

Washington is betting heavily on a native security force to keep the peace in Afghanistan if American and NATO armed forces are to withdraw and not have the country descend into chaos. But as T. Christian Miller, Mark Hosenball and Ron Moreau write in Newsweek, America's investment in building an Afghan police force — which since 2002 has meant more than $6 billion spent to buy weapons, build training centers and hire instructors — has been "a disaster."

The public's distrust of the police — a U.N. poll last year showed a majority of Afghans believed the police to be corrupt, and there have been accusations of local police committing crimes from drug trafficking and extortion to rape — means it will be that much more difficult for the U.S. to extricate itself from the country.

When President Obama conducted a review of the situation in Afghanistan earlier this month, Newsweek reports he was stunned when Lt. Gen. William Caldwell (who took over the training program last November) informed him that police hadn't been trained in the eight years since the U.S. invaded. "All we did was give [recruits] a uniform," he said.

"Eight years? And we didn't train police? It's mind-boggling," the president replied.

Newsweek reports that, according to Caldwell, three-quarters of the ANP's 98,000-member force has received no formal instruction, and whatever training they did receive came at the hands of hired contractors, many of whom were American ex-cops or sheriffs working without direction or oversight, in a program with no accountability held by any single agency or official.

For more read the Newsweek story, "The Gang That Couldn't Shoot Straight."