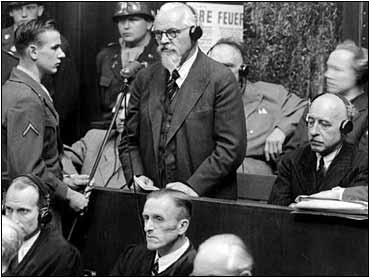 President Bush signed an executive order Tuesday which allows the government to try foreign terrorists by military tribunal rather than by the criminal court system. But don't expect any modern-day Nuremberg trial just yet.

There are a few important caveats in the order, no such tribunal currently exists, and none may ever be called upon depending upon how the war on terrorism continues. There is also the possibility that some federal judge somewhere along the line, when asked to evaluate the constitutionality of the tribunal, will decide that it is not so constitutional absent some formal declaration of war or other such formality which has not yet occurred.

Still, the move clearly is designed to ratchet up the heat on any unfortunate terrorists who happen to be caught by Allied forces as well as make things a little more tidy for law enforcement types, be they military or civilian. And while I suspect it is making civil libertarians and defense attorneys even more nervous about governmental powers than they already were in the wake of the USA Patriot Act, the executive order makes some sense, or at least isn't nonsense, especially when considered in the larger context of the world we have inhabited since September 10th.

The new order would give the government, down the road a bit, the option of trying any foreign terrorist in a forum and using procedures that only barely resemble those used in the criminal trials we all are used to watching on television or reading about in newspapers. The President would establish the tribunal and then the Defense Department would be responsible for establishing its rules.

That means, for example, that current Defense Secretary Donald H. Rumsfeld and his merry gang at the Pentagon would be primarily responsible for creating adjudication procedures which ideally would be both fair and reasonable. It is a daunting task. For example, will the tribunal adjudicate federal crimes or state crimes or international crimes? And if federal laws are adjudicated, how will the tribunal separate the substance of those laws from the procedures which govern them? No one should confuse Defense Department officials with the Sandrehin when it comes to judicial wisdom. And no one should confuse Mr. Rumsfeld with Jefferson and Madison when it comes to individual rights and liberties.

Since it essentially would make up all the rules, you can easily see why the Administration would be so hot for this type of quasi-legal option. The tribunal process probably would be faster, cheaper, more efficient and much less public than your average, garden-variety high-profile criminal trial, which are four good reasons why the Administration wants the tribunal as its ace-in-the-hole for particularly tough or sensational cases. But there are two other reasons as well.

By being so much more private, a trial before a military tribunal almost certainly would compromise law enforcement and mlitary intelligence operations far less than would a public trial. So if the government wanted to try a group of terrorists in succession over a period of years, it certainly would opt for the tribunal in order to help ensure that continuing investigations were not compromised. Finally, it's a fairly good bet that the whole process would be set up to dramatically increase the chances of prosecutorial victory, which is always a reasonable goal for prosecutors. You just never know what a real judge or actual jurors will do, right?

So why am I defending, or trying to, a process which stacks the deck against an individual against the power of the state? Mostly because the order expressly excludes US citizens from its reach and it is only US citizens who are entitled to all of the constitutional rights federal and state courts have interpreted on our behalf over the past few centuries. Only US citizens, for example, are entitled to a public trial and to a dispassionate arbiter (i.e., a federal judge) and broad discovery rules in criminal cases which require prosecutors to share exculpatory evidence with defendants. Only US citizens are entitled to all of the due process rights we always hear about; the rights which are so fundamentally important in the balancing between state power and individual liberty.

So long as no American citizen can be brought to justice before such a tribunal, its existence and even its use doesn't and won't jolt my conscience. Sure, I would rather have anyone charged with any crime of terrorism tried in an American court in order to show the world what a great - if imperfect - judicial system we have here. After all, that's essentially what we did during the (first) World Trade Center trial and during the just-completed African embassy trial. But I'm not sure I'm willing to absolutely insist upon it in every case. Justice can come in many forms and not every crime committed by anyone anywhere in the world necessarily has to be adjudicated in the tiny little package we call our criminal justice system, even if we decide that we want our laws to apply.

Collectively, the West didn't give Nazi war criminals all of the constitutional rights to which Americans were entitled in the 1940s, so why exactly should al-Qaida members get a better deal? Because they are criminals instead of warriors? Perhaps. But we weren't trying the Nazis simply because they were warriors; we were trying them because they had committed crimes against humanity. And to the extent that it will be the military which ferrets out these particular "defendants" it doesn't seem terribly unfair to me that it would be a military tribunal which dispenses justice to them.

The closer call, of course, the one which really will raise a lot of concerns, will be what the Administration does if a foreign terrorist - say someone here legally on a work visa - commits an act of terrorism in this country. In that scenario, it is hard timagine the military wresting control of any such defendant from civilian prosecutors. And it is equally hard to imagine a federal judge permitting that to take place given that legal immigrants do have certain constitutional rights.

I guess we'll see. In the meantime, the order just strikes me as an example of the adage that all is fair in love and war.