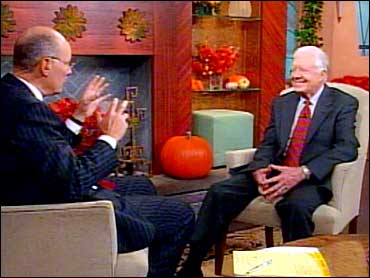 Former President Jimmy Carter has worked tirelessly on such causes as Habitat For Humanity, has written 18, and has received the 2002 Nobel Peace Prize.

In an interview Wednesday on The Early Show, Mr. Carter says, "I don't think there's any book that I've ever been able to find that really tells definitively the story of the Revolutionary War, what caused it, how it affected individual persons, how their lives would change, how they were completely transformed."

His book takes readers to the Carolinas, Georgia and Florida telling the story from all sides. Mr. Carter explains, "One of the major battles was the King's Mountain on the border between the two Carolinas. The Redcoats there unanimously were Americans. Only one British was in this battle and he was a commanding officer. And this is, by far, the bloodiest war that was ever fought because it divided families.

"In the Civil War, war between the states, the country was divided by the Mason-Dixon Line and if you lived north of that, you were generally a Yankee and south of that, you were generally a southerner. In this case, there was a division between a father and a son and it's the only war in which we've ever been deeply engaged when there was a premise of take no, give no quarter - that means if the other side surrenders, kill them."

This book was not a short project for Mr. Carter. He tells co-anchor Harry Smith, "It took me seven years of detailed study of every aspect of the Revolutionary War, from the perspective of the British and the American revolutionaries and also the Indians: the Creek and the Cherokees. And how they intewove their personal lives ultimately to bring about a success.

"And not many people know that the war actually lasted from, you might say 1775 until 1784, nine long years! And so I think it tells a part of a revolution, particularly the intense personal part that really is not available anywhere else."