[Editor's note: This post was written by CBS News producer Paul Facey, who worked on the latest installment of "Where They Stand" with correspondent Ben Tracy. Check out Ben's blog from earlier today if you want more.] 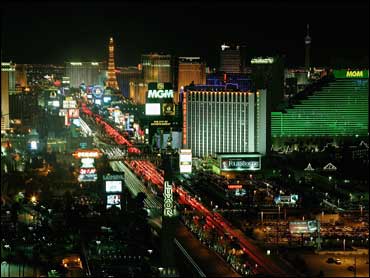 (Getty Images)
If you really want to see the effects of the foreclosure crisis, take a tour of Las Vegas. I'm not talking about the Strip, but rather, the city's once-promising residential neighborhoods. That's what Ben Tracy and I did for our report on housing for the series "Where They Stand."

A local realtor took us around an area called Summerlin, where "For Sale" signs dotted the lawns of newly-built homes. They were barely lived-in by their former owners who lost the houses to foreclosure. There were blocks lined with empty plots of land owned by investors now too nervous to build. Homes that once sold between $600,000 and $700,000 were now selling at bargain basement prices as low as $300,000. Meanwhile, several projects in Summerlin have been put on hold, including a brand new complex of luxury condos that went into bankruptcy before any of the residents moved in.

As we visited several Vegas neighborhoods, it was easy to see why the city is considered "ground zero" of the foreclosure debacle. Las Vegas has seven of the top 100 worst-hit zip codes in the nation, and foreclosure filings are up 83 percent from a year ago, according to RealtyTrac. While there are many reasons for the housing crisis, Las Vegas residents seem to put most of the blame on speculators who bought up properties hoping to make a quick profit and fraudulent mortgage lenders who preyed on unsuspecting home buyers. In realty, there's plenty of blame to go around – including the borrowers themselves.

But as we spoke to struggling Vegas homeowners, one message came through loud and clear: Time is not on their side. They are looking for immediate help – either from the government or lenders willing to work out a deal. I don't proclaim to know the answer, but after covering this topic for nearly a year and witnessing firsthand the impact that abandoned foreclosed properties can have on an entire neighborhood, it's probably in everyone's best interest to figure out how to clean up this housing mess.

If you are facing foreclosure – or you know someone who is – there is a 24-hour national hotline for homeowners in need of help. It's called the Homeowner's HOPE Hotline. The number is 888-995-HOPE.

And don't forget to check out what we found in our piece about what the presidential candidates propose to do about the mortgage crisis. Just click here to read it, or check out all of the "Where They Stand" pieces to date.