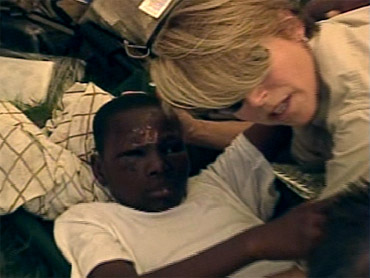 (CBS)
CBS Evening News Anchor Katie Couric reflects on the three days she spent in Port-au-Prince, Haiti immediately following the earthquake there. A few drops of water on acres and acres of parched land - that's how I woke up thinking of the massive relief effort that's been orchestrated to help the Haitian people.

I will never forget the three days I spent there following Tuesday's earthquake.

"The horror, the horror," as Kurtz said in "Heart of Darkness." The despair, the desperation, the lack of dignity for the dead.

We drove through the back roads one night, house after house destroyed in a neighborhood that had so little to begin with.

A heavy set woman, maybe in her twenties, in black underwear lying face down, was covered with a light coating of ash - surrounded by a half dozen other dead bodies - one arm reaching upwards to the heavens because rigor mortis had set in.

Watch CBS News Videos Online
Some bodies I saw on the sidewalk were smaller, covered with sheets. I imagined who they might be: a toddler who was playing inside a house, a school boy who was doing his homework.

Then there were the tent cities: families just sitting, waiting under sheets, under a flatbed truck, and in an abandoned school bus.

Beautiful, beautiful babies staring blankly, perhaps because they had no strength to cry. And the people knocking on the window of our rented SUV asking for water that we didn't have.

I thought about what I would do if I thought I was literally dying of thirst. The lengths I might go to to get water and food for my family. The primal need to beg, the despair when your pleas are rebuffed or ignored. Meanwhile, having an injured child is terrifying enough - the feeling of helplessness so overwhelming.

How to Help Victims

Imagine not getting your critically injured child help? Not being able to get him or her to a hospital, and even if you did, having the hospital unable to help either because there aren't enough doctors or the medical supplies he or she needs are simply not there.

The Belgian doctors and nurses who came to Haiti within 24 hours are my new heroes, although I still wonder why a teenage boy was sitting in front of the iron gates with an IV and no one was letting him in.

An anesthesiologist from Belgium told me while they had painkillers and antibiotics, there were so many things they didn't have to help victims with crushed pelvises, broken bones, fractured arms and legs.

609264One man told me he had taken his friend to the tents and the doctors told him to bring her back in a day or two because they had no x-ray machines to determine what had happened. The very idea of moving her and bringing her back seemed overwhelming.

But the most harrowing moment of all was when I bent down to ask a thirteen year old boy his name. The flesh on his forehead had been scrapped away and his leg, the doctors told me, was broken. He reached up and grabbed my hand. "I have to pee," he said, in perfect English. He became more emphatic. "Please, I have to pee!" I told him, hold on…I think he was embarrassed at the thought of just peeing in his boxer shorts, which was all he was wearing.

A woman, I'm not sure if she was a doctor or a nurse, told him she would bring him a bottle. The doctors began to work on his leg and he held my forearm tighter.

What is your name, I asked him. "Pierre Larousse" he answered.

Where is your family?

My father is morte, or dead, he told me.

Your mother, I asked as Sebastian, our driver, translated. "Morte," he said. Dead.

Then, it was as if the anguish and pain of an entire country took over his body. A powerful, piercing scream exploded from his slight physique. It seemed to fill the tent and to last forever.

"Why? Why," he wailed. He screamed Papa, but Sebastian told me he was screaming to God, not his dead father.

"Squeeze my hand," I told him, with the sudden feeling that this was my child.

He told me he was too weak to squeeze it hard. "Breathe, just breathe," I implored him, softly but firmly.

"Stop pulling," he yelled to the doctors who were resetting his leg. His screams became whimpers. He raised his body slightly and put his arm around my neck and brought me closer. I never wanted to leave him.

They needed to move Pierre. I stroked his head before getting up. I wanted to take him home, take him to a hospital in New York, rescue him from this place and this life.

I wish we could rescue the whole country from this unspeakable tragedy and unimaginable poverty. Pierre's grandmother is here, someone told me. I looked at the tent, and there she was, a thin woman in a black and pink t-shirt, kneeling beside me where I had been. We gave her Sebastian's number. I pray she calls. I have to find Pierre. I have to help him in any way I can.